Vinita Sud Belani of EnActe Arts who is a Hindu and originally from India, and Farah Yasmeen Shaikh of Noorani Dance who is an American born Muslim to Pakistani parents have long wanted to tell this story through the eyes of those who survived 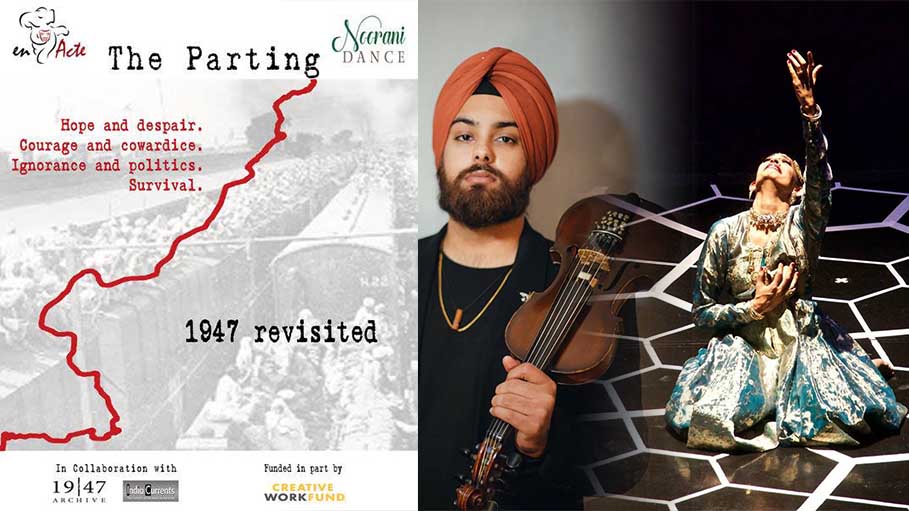 70 years ago India was divided into two parts by England, following the Indian Independence Act of 1947. Essentially the last act of Colonialism on the part of the British, it divided the country based on religious identity with the goal of making Pakistan and what is now Bangladesh Muslim states. This set off one of the great migratory upheavals of the twentieth century, one in which both Muslims and Hindus panicked and feeling suddenly vulnerable and stateless, fled or were driven to flee across the new borders for what they perceived to be safer haven.

Vinita Sud Belani of EnActe Arts who is a Hindu and originally from India, and Farah Yasmeen Shaikh of Noorani Dance who is an American born Muslim to Pakistani parents have long wanted to tell this story through the eyes of those who survived, those who have been forgotten and those who perished. The result is the play The Parting, presented by Z Space in January of 2018, followed by a production in San Jose in March 2018.

While the major political figures of Partition are well known: Lord Mountbatten, Nehru and Gandhi, leaders of Indian National Congress and Jinnah from the Muslim League who became the head of Pakistan, none of them will appear in the play. Instead the story will zero in on the British lawyer Cyril Radcliffe who was assigned the task of drawing the line between India and nations, thus sealing the fate of families and individuals who would find themselves caught up in the turbulence of Partition during the birth of these nations. In the end, more than 15 million were displaced, while an estimated 2 million died.

The cast of 22 actors and 18 dancers along with a lone violinist (who is also the composer of the original score) will take to the stage to tell these stories that cross borders and time in order to show the price of human conflict. What makes the play so compelling is that all the stories come from real, lived, and documented events. Interwoven and linked in unexpected ways, the production brings to the surface the causes that became the fault lines between communities— many of which remain still unresolved and buried.

Though the partitioning of India occurred 70 years ago, the story The Parting tells echoes today in a modern world that has been turned upside down by a number of internal crises that see borders and populations being upended with huge swaths of citizens forced to flee their homes in order to secure a future.

"I have never been to Pakistan but I have many Pakistani friends there,” says Belani. “It is clear to me that the socio-cultural affinities developed over five millennia in the South Asian sub-continent cannot be eroded or negated by a mere 70 years of propaganda by politicians. Meeting Farah and Guneeta was fortuitous. We decided that on the 70th anniversary of Partition, this message would become our mission - a year long Partition Project that would bring to life the stories that the 1947 Partition Archives is so assiduously collecting. In telling these stories two things will become clear.  One - at a human level, courage, cowardice cruelty and compassion existed on both sides of the divide. Two - history can teach us a valuable lesson on the fall-out of callously dividing a country along one vector, in this instance, religion, and ignoring other ties that bind."

The lone violinist who will wander throughout the play in different scenarios is the composer of the original score, Raaginder Singh Momi. “The violin is a character in the play, a voice, which sometimes represents the voice of a physical character and sometimes the mood of the collective in that moment,” says dance and music director Farah Yasmeen Shaikh. “We love the emotionality it brings to the proceedings.”

Belani adds, “The nature of the Indian classical violin is very evocative for all Indians, both Muslims and Hindus. And not unlike Fiddler on the Roof, where it was used so movingly, The Parting is ultimately a story of home and being pried away from it.”

The dancing will include multiple forms of South Asian dance – both classical and folk. Most prominent will be that of Kathak. Classical dance originating in North India, featuring Farah Yasmeen Shaikh herself along with the performance ensemble of Noorani Dance. Also featured will be Bharat Natyam performed by Abhinaya Dance Company and folk dance of regional styles from Punjab and Bengal (both the areas were deeply affected during the 1947 Partition).

The stories of The Parting were curated and developed by Anurag Wadehra from multiple sources over the years. Some were imagined from the plight of the millions of refugees, a few ripped from the headlines of that era and some were retrieved from scholarly research and oral histories of survivors.

Writer and director of the play Salil Singh says, “The production should awaken sleeping memories and remind us of what was lost--the terrible human cost of partition on individual lives as the worst of humanity was unleashed and plunged an entire country into darkness. But ultimately, it should also give us hope and inspiration--that through the act of remembrance, in reliving the extraordinary choices and struggles of those individuals, we also witness how it brought out the best within ordinary people.”

Select narrative threads include that of star-crossed lovers Boota and Zainab, he a Sikh farmer who gave shelter to Zainab, a Muslim woman with whom he started a family. Newspapers covered this true story extensively at the time even though communities on both sides of the divide contested it at the time and over the years. As part of an attempt to resolve some of the inter-family mayhem caused by partition, the country passed the Abducted Women’s Recovery Act, which resulted in Zainab being forcibly separated from her child and husband and sent back to Pakistan. How Boota crossed religious and political borders in an attempt to reunite his family has taken the form of a modern day legend.