U S diplomat Ann L Mason first desired being in an autorickshaw when she was in Pakistan. Even though she was being driven around in armoured and beautiful cars she eagerly wanted to experience an auto drive. 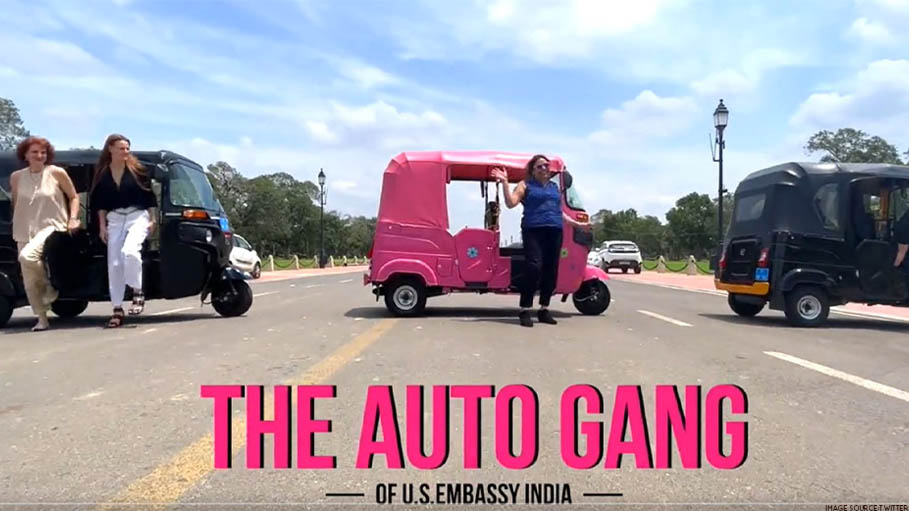 Four US women diplomats have chosen a unique way to travel the streets of Delhi.

These women use their pink and black autos to drive around the city to complete all their work including official trips.

What’s more interesting is that they drive these “personalized autos” themselves.

U S diplomat Ann L Mason first desired being in an autorickshaw when she was in Pakistan. Even though she was being driven around in armoured and beautiful cars she eagerly wanted to experience an auto drive.

So, when she got a chance to buy an auto in India, she grabbed the opportunity.  She’s never driven any vehicle with a clutch. However today she drives the auto in the streets in Delhi with confidence.

"From Detroit to my auto rickshaw, I've had a lifelong love of vehicles and so everywhere I've been there's been something special about a vehicle but really none more special in my opinion than an autorickshaw.

Shareen who was born in Karnataka said "It's truly an honour to be able to serve my adopted country in the country of my birth. All my experiences growing up in India and then being an immigrant in US and then naturalizing and becoming a diplomat are all the various experiences that I feel I bring to my personal and professional life.

These feisty women are breaking gender stereotypes by driving an auto on Indian roads. Not only are they completing their official work, but they are also having fun in the bargain driving the pink and black three-seater.

Ruth Holmberg expressed that she enjoys driving an auto. She also loves it when other women see her as an inspiration. For her Diplomacy is not that “high level.” With her auto she meets many people every day on her way from work. She’s able to build one on one relationship with her local community and for her that’s an important part of diplomacy.

Jennifer explains that she got to see the good side of people in the city when she embarked on this journey.  “I get to see the local perspective, more of the humanity”, she explained.

Learning wasn’t difficult except navigating her way around other auto-rickshaws and animals was a bit challenging.

Jennifer Bywaters says “have fun and be brave. Think outside the box. You don’t need to do things the way its always been done.”

The unique experience of driving an auto brought some form of positivity and learning in the lives of each of these women. As they rightly say experience is the teacher of all things.

US Nuclear Power Industry Has a Russian Problem