All in all, the American and Indian families blended so well. A merger of two entirely different cultures and traditions. 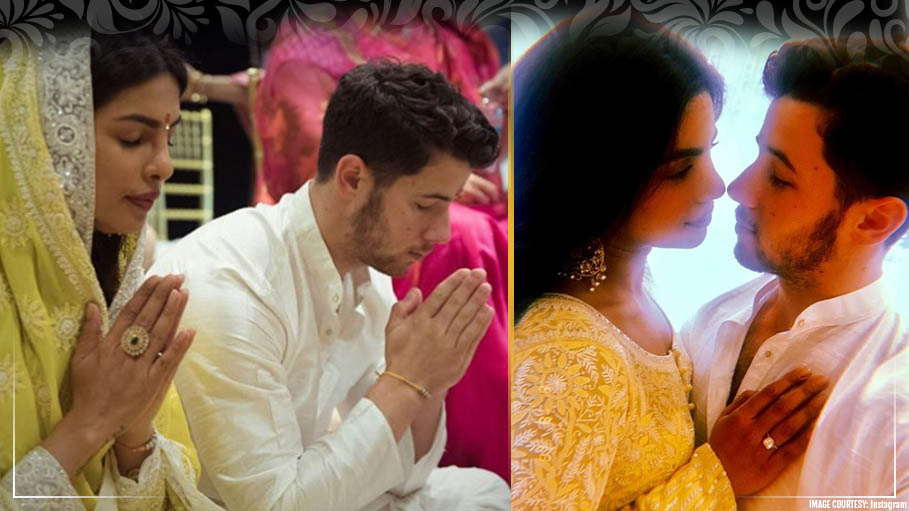 Trending pair Priyanka Chopra and Nick Jonas have finally got engaged in a grand Roka (Pre-wedding) ceremony held on August 18. Prominent personalities like Mukesh Ambani, Alia Bhatt and Parineeti added star power to the engagement bash by their presence.

The couple finally made their relationship official in PeeCee’ residence. A Roka ceremony is an auspicious occasion which signifies the union of the families wherein gifts are also exchanged between the families. On Saturday, Priyanka Chopra took to Instagram where she officially confirmed her engagement to Jonas by posting two awesome pics with her to-be-husband. “Taken...With all my heart and soul...” were the lines that were posted below the image. Even Jonas shared identical images, calling Priyanka “future Mrs Jonas.”

Next, it was time for some family photos. Priyanka along with Nick posed with Nick’s parents and they all made a happy group. Next, it was Parineeti Chopra’s turn. Parineeti clicked a cute picture alongside her sister and future brother-in-law. The beautiful background with Nick and Priyanka’s initials was not to be missed in the picture. The couple clicked some romantic pictures with only the two of them together. The couple looked genuinely happy on this all-happy occasion.

After the ceremony, family and friends were invited to the engagement bash of the couple. The Paparazzi didn’t miss the opportunity to click each one of them, dressed in flashy outfits. Alia Bhatt and Parineeti, in particular, caught the media’s attention. The engagement bash was truly entertaining and the photos are living proof of this. Photos of the engagement party splashed all over social media reveal that the celebrities thoroughly savored the bash. In one of the trending video clips of the engagement party, Nick Jonas was seen clearly enjoying himself while Priyanka was dancing the night away in the background.

Recent engagement photos that have emerged show Papa Jonas surrounded by all the women. He could be seen clearly grabbing all the attention of the Indian womenfolk. Nick Jonas’ mother looked gorgeous in a pink saree which she carried ever so gracefully. She looked like a super happy mom on her son’s engagement party. All in all, the American and Indian families blended so well. A merger of two entirely different cultures and traditions.

Nick Jonas reportedly proposed to Priyanka Chopra in London in the month of June after shutting down a Jewellery shop to buy Priyanka an expensive engagement ring.  At the moment, no date has been announced for the nuptials.