A soldier from the Joint Base Lewis- McChord came forward to help the passengers who are trapped inside the train in the Amtrak crash. 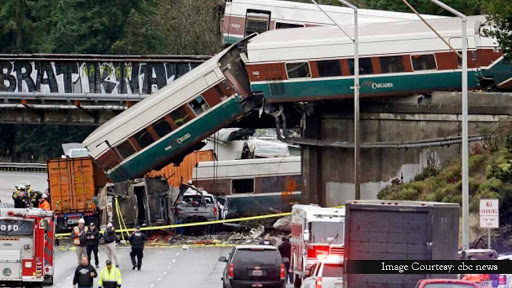 A hero soldier watched the Amtrak train accidentally leaving its track and plunging from the overpass. In no time, this soldier jumped in to rescue the passengers who are trapped inside the passenger train. He leapt out of his pickup truck and immediately came into action in order the save the human lives.

Second Lieutenant Robert McCoy was indeed at the right place at the right time. Being a soldier, he stepped in saving the life of the commuters, who have come down with the terrible fate. His quick action has earned him a name of the ‘hero soldier’ as he didn’t wait for others to serve humanity. He stops the brakes of his pickup truck on time when he noticed the train hitting the wall, creating a huge sound and explosion.

He quoted,”I saw many people that were just paralyzed with fear and I don’t blame them at all. I mean, it was kind of a hard situation to watch unfold.”

With the Christmas and New Year holidays on the way, Washington experienced the horror of the train derailment in DuPont, resulting in the death of three and injuring many. Amtrak crash caused a massive havoc within the city and embedded fear in many. This JBLM soldier could not resist himself from rescuing the passengers, thus, he carried the tourniquet & CPR mask from his pickup truck to the location, trying to help the wounded ones.

He carried many to the safety and then turned his attention to the passengers who are still present on the hanging train. McCoy thought, if the train continues to fall off the bridge, it would fall on the passengers in the pavement and hit the three cars present in front of him. Without any further thinking, the hero soldier went ahead to stabilize the situation and saved as many lives as he could.

Serving in the medical field has taught him to handle the pressure and compelled him to stand with the people. Some were panicking and yelling for help, while there were others who were searching their loved ones. In the Amtrak crash, a volunteer also offered his helping hand to the soldier, where the former climbed on the top and on the suspended train.

Inside the passenger train, McCoy found almost 20-30 passengers, including a family. He reached right on time, only to notice, the grandmother of the family was swinging loosely from the train and the daughter was trying to pull her back in. He immediately rescued her and put her down in a safe location. Through his presence of mind and medical training, McCoy has offered his service in rescuing the passengers from the dreadful destiny and emerged as a hero in everyone’s eye.