Landslides and flooding killed 13 people as heavy rain from an approaching storm lashed the southern Philippines, with some residents stranded on rooftops, a disaster official said Friday. 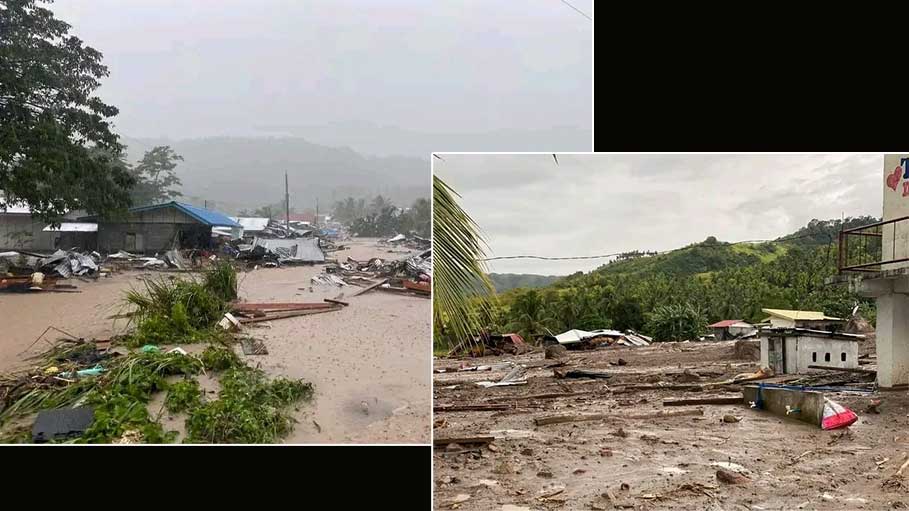 Cotabato, Philippines: Landslides and flooding killed 13 people as heavy rain from an approaching storm lashed the southern Philippines, with some residents stranded on rooftops, a disaster official said Friday.

Ten of the dead were from the town of Datu Blah Sinsuat on Mindanao island, he said.

Rescuers retrieved another three bodies in the neighbouring town of Datu Odin Sinsuat.

"The water started entering the houses before dawn. This is the first time it happened to us," Mr Sinarimbo said.

Rescue teams in rubber boats had to pluck some residents from rooftops, Mr Sinarimbo said.

"We're hoping the toll will end there," he said.

Provincial police posted on their official Facebook page photos of the shell of a house swept to the bank of a swollen river, a toppled steel fence flanked by debris and a rock-strewn road.

In another photo, police rescuers are seen carrying a baby in a plastic wash tub as they wade through chest-deep floodwaters.

Floodwaters had since receded in several areas, but about 90 percent of Cotabato City remained waterlogged and there could be more flooding in a few hours from heavy rain upstream, Mr Sinarimbo said.

"Our focus at this time is rescue as well as setting up community kitchens for the survivors," he said, although the exact number of people affected was not yet known.

Heavy rain began late Thursday in the impoverished region, which is under Muslim self-rule after decades of separatist armed rebellion.

The state weather office in Manila said it was partly caused by Tropical Storm Nalgae, far to the northeast.

Nalgae was headed towards the northern Philippines, where the civil defence office said nearly 5,000 people were evacuated from flood- and landslide-prone areas ahead of an expected landfall on Saturday or Sunday.

An average of 20 typhoons and storms strike the Philippines each year, killing people and livestock and destroying farms, houses, roads and bridges, although the south is rarely hit.

At Least 13% Rise in Sexual Assault Cases in United States Military in 2021: Pentagon