The capital of Lebanon has been shaken up by two shockingly massive explosions leaving entire streets in misery. The explosions have taken place in Beirut’s port on Tuesday leaving at least 80 people dead and more than 4,000 injured. 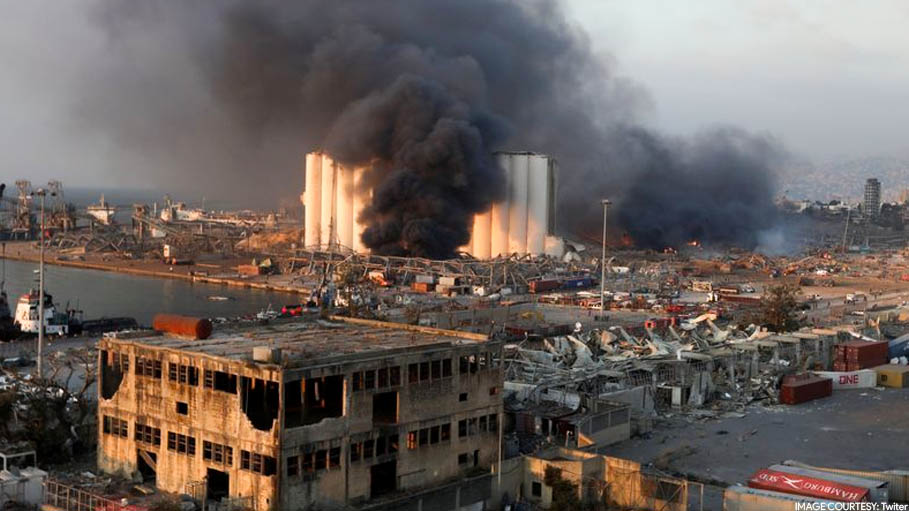 The capital of Lebanon has been shaken up by two shockingly massive explosions leaving entire streets in misery. The explosions have taken place in Beirut’s port on Tuesday leaving at least 80 people dead and more than 4,000 injured. There were two major blasts; the second one being more severe than the first.

A retired school teacher named Makrouhie Yerganian who lives close to the Port said, “It was like an atomic bomb.” She added, “I've experienced everything, but nothing like this before.”

Another resident said, “The force of the blast threw us backwards into the apartment.” The explosions were deafening and residents living miles away heard the loud sounds.

Please take a minute or two to pray for our brothers & sisters at Beirut, Lebanon.There has been a massive explosion &the blast leave dozens dead & thousands injured.

The second explosion was more severe which sent an orange ball into the sky. The explosions have flattened the harbour side. The situation is grim at the port where corpses can be seen strewn around. Some bodies are buried under the rubble.

Buildings across Beirut, Lebanon are damaged the morning after the #BeirutBlast. Much of the port was also flattened when the explosion sent a giant mushroom cloud into the sky.

More than 70 people were killed and 3,000 injured, with bodies buried in the rubble, officials say pic.twitter.com/qLaGEm8sJL

Video footage and photographs show complete devastation with people drenched in blood, cars flipped over, shops been destroyed and glass windows shattered. A ship anchored near the port was on fire. Another ship with United Nations Peace Keeping Force was damaged and some of their personnel were injured. Lebanon’s Prime Minister Hassan Diab in a statement said that 2,750 metric tons of ammonium nitrate which are a highly explosive material used in fertilizers and bombs were stored in the port warehouse for 6 years without safety measures.

Benjamin Strick who works with investigations website Bellingcat said on Twitter that explosions appear to be centered on a 130-meter long grey warehouse alongside a dock.

Leaders from across the world including America, Brazil, Mexico, Panama, and many others have sent in their condolences on the unfortunate incident. Even the country’s rival Israel has offered to send aid.

The Prime Minister declared Wednesday a day of mourning. “I am sending an urgent appeal to all countries that are friends and brothers and love Lebanon, to stand by its side and help us treat these deep wounds,” the Prime Minister said.

He has launched an investigation saying that he “will not rest until we find those responsible for what happened, hold them accountable, and impose maximum punishment.”