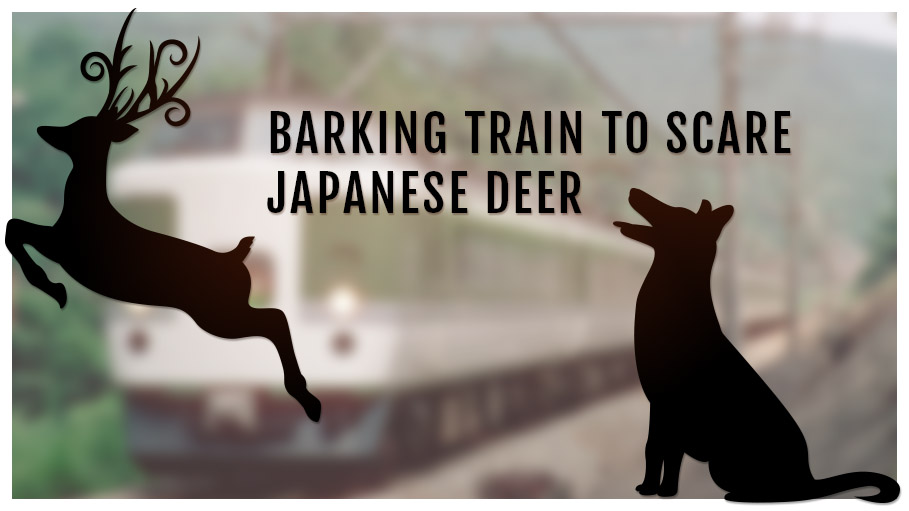 The growing population of deer in Japan is causing problems to the railways; every year number of deer hit by trains is increasing day by day. In order to tackle this issue, Japan’s Railway Technical Research Institute has come up with an idea of using sound of barking dogs in special trains to scare deer away from danger zones while the trains are approaching preventing damage to train, carnage of deer and delay in the movements of the trains.

According to the Tokyo-based institute, the deer have a habit of repeatedly snorting short, shrill sounds to alert other deer when they perceive danger. Therefore the officials thought it would be a good idea to combine their snorting sound with the sound of barking dogs, to scare the deer. Accordingly in the pilot tests, Japanese researchers have attached speakers that blare out a combination of sounds designed specifically to ward off deer.

The tests included 3-second blaring’s of deer snorts and 20-second recordings of dog barks. First, the recording captures the animals’ attention by playing a snorting sound that deer use as an “alarm call” to intimidate other deers of danger. Then, the sound of howling dogs drives the deer away from the tracks so the train can pass, and it worked.

Railway Technical Research Institute researchers said during the late-night tests they have found that the recordings they designed could reduce the number of deer sightings near the train tracks by as much as 45 percent during winter nights, the season which typically see the highest collision rates.

As it proves to be effective, future plans along with running train also include static barking sites where deer are commonly seen along the railway lines.

"We hope to finish it into a system that works in mountainous areas and elsewhere so railroad companies will want to introduce it," an official from Japan’s Railway Technical Research Institute told The Asahi Shimbun.

Before this initiative, the problem of deer congregating on train tracks seemed intractable. Despite the best efforts of railways, ropes, barriers, flashing lights, they are unable to deter the animals or even lion feces meant to repel them. Kintetsu Railway has had some success with ultrasonic waves along its Osaka line, but many rail companies are still struggling to deal with the issue.

In the year 2016 Japan set a national record in trip suspensions and delays of at least 30 minutes because of animal collisions. There were 613 such cases on 2016, 185 more than the previous year 2015.

The new deer-deterring soundtrack is particularly useful because it's relatively low-tech and would be cheap to implement. Unlike the ultrasonic plan, it doesn’t have to be set up in a particular place or require a lot of new equipment. As the devices are fitted to the trains and played through a speaker on the train, it goes wherever the train goes, and can be deployed whenever necessary. One speaker on each train could do the job for a whole railway line.

According to the BBC, the noises will only be used in unpopulated areas, reducing the possibility that people living near the train tracks will have to endure the sounds of dogs howling every night for the rest of their lives.

‘We hope to finish it into a system that works in mountainous areas and everywhere, so that the railroad companies will want to introduce it.' An official of the Institute told The Asahi Shimbun Newspaper

Deer are attracted to railway lines because of a need for iron in their diets. They lick the rails to pick up iron filings caused by the action of wheels against tracks in the evening and late at night – which, sadly, leads to regular collisions.

The Railway officials are in a constant battle to keep the deer separate from the unforgiving nature. They used tons of onrushing rolling stock to ward of the deer but failed also their plans, which include the spraying of lion faeces on the track were abandoned as during monsoon the remains were washed away by rain.

To deter deer from the railway tracks, a plan was designed using ultrasonic waves, which also earned railway employee Japan's Good Design Award in the month of December. The plan using ultrasonic waves was specially designed to allow animals access to the tracks at times when trains aren't running. But large-scale implementation of this method is immediately not possible. With this sound therapy Japan is hopeful in all way possible to deter the deer from its railway tracks.

Deer are not the only animals that Japanese railways have sought to protect against the dangers of railroad tracks. In 2015, the Suma Aqua life Park and the West Japan Railway Company teamed up to create tunnels that could serve as safer rail crossings for the turtles that kept getting hit by trains. The creators hope to launch this new system of saving deer, by March 2019.