Israel's Benjamin Netanyahu is eyeing a return to power when the country holds its fifth election in four years Tuesday, his chances potentially boosted by the rise of the extreme-right. 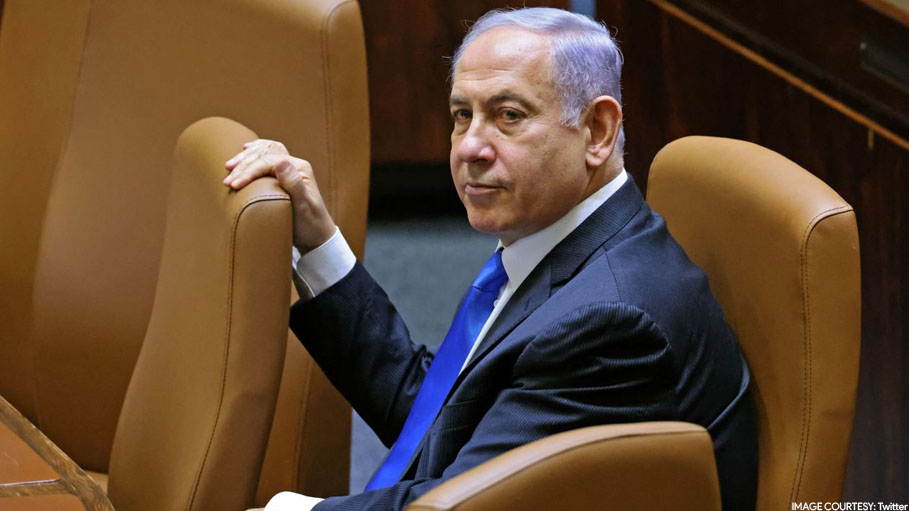 Jerusalem: Israel's Benjamin Netanyahu is eyeing a return to power when the country holds its fifth election in four years Tuesday, his chances potentially boosted by the rise of the extreme-right.

The longest-serving leader in Israeli history, the 73-year-old right-winger and security hawk is for the first time in years campaigning from the opposition.

He is up against the centrist caretaker Prime Minister Yair Lapid, who last year manoeuvred a motley alliance of eight parties into a coalition that managed to oust Mr Netanyahu from power.

Mr Lapid sails into the November 1 election just days after a diplomatic breakthrough -- finalising a landmark maritime border deal with foe Lebanon that unlocks offshore gas riches for both sides.

Mr Netanyahu, meanwhile, is hoping his record 15 years in power can convince the electorate that only he has the necessary experience to lead the country, despite his ongoing corruption trial.

The polls have Netanyahu's Likud emerging as the largest party in parliament, the Knesset -- but in a political system dominated by coalitions, his path to the premiership is far from certain.

Even while the ballots are still being counted, both leaders are likely to enter intense negotiations with smaller parties as they seek to reach the 61 seats needed for a parliamentary majority.

For Mr Netanyahu that means rekindling his longstanding ties to the ultra-Orthodox, while he has also courted the extreme-right alliance of Itamar Ben-Gvir and Bezalel Smotrich.

The duo's Religious Zionism alliance is surging in the polls and could clinch third place, more than doubling its current six seats.

The backing of the extreme-right could serve as Netanyahu's ticket back into high office, a move which would likely come in exchange for handing significant powers to Ben-Gvir.

With Lapid's Yesh Atid party behind Likud in the polls, one of his aides said he "wants to make sure Netanyahu does not get these 61 (seats) with his allies".

Such a strategy means both convincing Israelis to turn away from the Likud leader and making sure that his potential allies win votes.

Under Israel's electoral system, parties need to win a minimum of four seats to make it into parliament.

"Lapid is trying to say that he is the only one who can bring together the anti-Netanyahu members of the Knesset," said Gayil Talshir, a political scientist at the Hebrew University of Jerusalem.

"He has to make sure his potential partners are getting above the threshold," she added.

Multiple parties are teetering on the four-seat threshold, notably all three Arab-led groups which have previously opposed Mr Netanyahu.

Mansour Abbas, leader of Raam which became the first Arab party to join a ruling coalition last year, told AFP there is a "crisis of confidence with the Arab public".

Arab-Israelis make up around 20 percent of the population and if their turnout falls, as expected, Netanyahu's bloc could win more seats.

Overall Israeli turnout is expected to remain relatively high, despite voters being "absolutely fatigued" according to veteran pollster Dahlia Scheindlin.

As with the last four polls held since April 2019, the political crisis will not end with election day.

Coalition talks can take weeks and, if they fail, there is a chance the electorate will soon go to the polls yet again.

Ms Scheindlin said voters "haven't changed their minds significantly over the last few cycles", but that their leaders' positions could shift.

"What is different is the shape of the parties and possibly the decisions of the party leaders who will have to decide which coalitions to go into," she said.

"That changes from election to election, it could change this time too."

The outcome of this latest vote may have wider consequences for Mr Netanyahu who is fighting corruption charges.

Securing the premiership could pave the way for Mr Netanyahu to seek immunity from prosecution, with the backing of Religious Zionism which is vowing to overhaul the justice system.

If he remains in opposition, he could "negotiate a plea bargain" according to Ms Talshir.

After releasing a memoir this month, she said, Mr Netanyahu after decades on the political stage may be "preparing the ground for his departure".