Bruno Mars has bagged the Grammy award for the ‘Album of the Year 2018’ for his critically acclaimed album 24K. 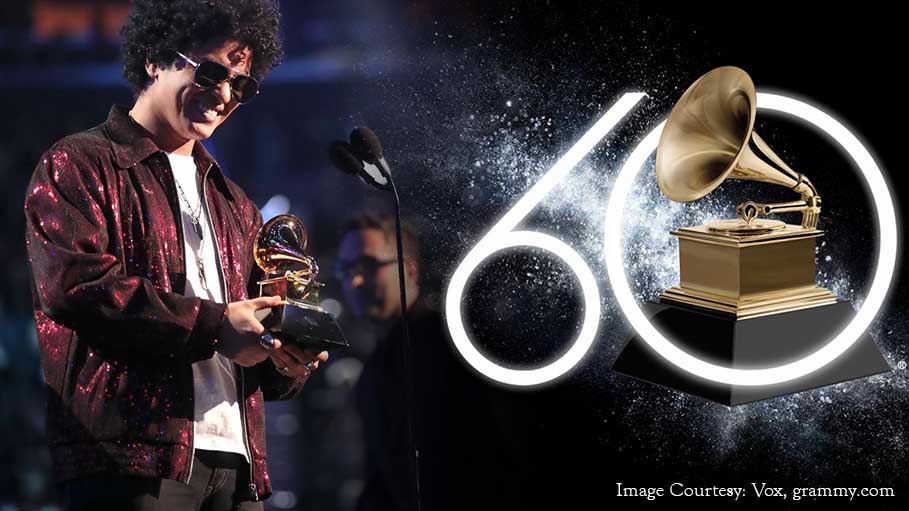 R&B singer Bruno Mars has bagged the Grammy award for the ‘Album of the Year 2018’ for his critically acclaimed album 24K. He also won the song of the year for “That’s what I like” as well as record of the year. It was a big night indeed for the ‘Uptown Funk’ singer. The star studded Grammy award ceremony which was a bit subdued this year was held in New York city last night.

The competition was pretty tough for the funky singer and he beat popular artists such as Kendrick Lamar for DAMN, Lorde for Melodrama, Jay Z’s 4:44 and Childish Gambino’s Awaken, My Love!

In his speech, he said “First off to the other nominees in this category...you guys are the reason I am in the studio pulling my hair out man...thank you for blessing the world with your music." Later he narrated a short story about opening a show in Hawaii at the tender age of fifteen.

He said that he entertained 1,000 tourists from all over the world. It was only later in life that he realised that the songs he was singing was penned down by legendary songwriters like Babyface, Jimmy Jam, Terry Lewis and Teddy Riley.

He dedicated this award to these legendary songwriters. He said “I’d like to dedicate this award to them. They are my heroes, they are my teachers and they laid the foundation.” Bruno said that singing these songs brought people together from all over the world and he wanted to rouse the same feeling with his album 24K.

The online world however chimed in with mixed reactions.

Bruno Mars gets it: People need to have fun. Aside from his insane amount of talent, it’s a reason why he’s so popular. Everything is so heavy and the country is so divided people forgot how to have a good time now and again. #grammys

Despite the mixed reactions, we are happy for the funky singer who has come a long way from impersonating Elvis Presley to bagging prestigious awards on stage. Way to go Bruno !