Civil Right Anthem, We Shall Overcome is now in the public domain after a long legal dispute, holding the song to be free from copyright. 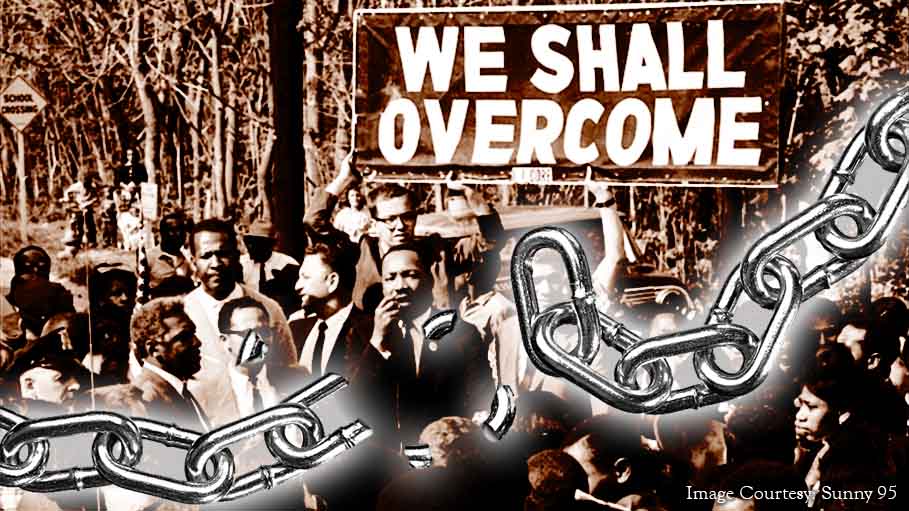 Civil Right Anthem, We Shall Overcome is now in the public domain after a long legal dispute, holding the song to be free from copyright. On 27th January 2018 both the parties fighting over the copyright issue of the song reached a settlement led to the lifting of copyright from the song forever, which has once become the voice of civil rights movement in America.

The song, We Shall Overcome is now in the public domain as a result of copyright protection settlement. The publisher and recorder of the song, Ludlow Music has finally agreed that the melody and lyrics of the song are hereafter dedicated to the public domain. That means that no one will have to pay a license fee for use of the song and the song is now free for all.

The two sides, fighting for the rights of the song. The documentary filmmakers of a documentary on the song's history and the producers of the 2013 film The Butler who wanted to use part of the song in the movie, on one side and Ludlow Music on the other side. That had challenged its copyright protection in the federal court.

The documentary filmmakers had been denied permission to use the song and were asked to pay as much as $100,000 as a license fee to use the song in several critical scenes of the film by Ludlow Music according to the law firm representing the plaintiffs.

In the year 1960 and 1963, Ludlow Music registered copyrights for the melody, which later become the anthem of civil right movements in United States of America. According to the Ludlow Music, the song's authors including famous folk singer Pete Seeger made changes to earlier versions of the song. The song's origins have been traced to spirituals at the turn of the 20th century.

The issue was in a federal court last year, when a federal judge partly rejected the copyright claim, saying the song's adaptation from an older work including the changing of ‘will’ to ‘shall’ was not original enough to qualify for the copyright protection.

In September last year Judge Denise L. Cote of United States District Court in Manhattan, New York, ruled the key verse in We Shall Overcome was not under copyright for lack of originality.

Judge Denise L. Cote said the copyright registrations were flawed and that the song publisher had not identified the original work on which their derivative was based and it did not clearly identify the differences.

The plaintiffs then sought to have the copyright for the entire song, which was declared invalid and the case was set for trial next month.

A trial was then set for 5th February and Ludlow Music agreed not to sue. But that wasn't enough for the judge and the legal team at Waldstein, which was previously involved in a case that put Happy Birthday to You in the public domain from the same Ludlow Music company.

The litigation which began in 2016, had become expensive and Ludlow Music has spent far more on the case than it had earned on the song in recent years, Paul V. LiCalsi, a lawyer for Ludlow and the other defendant, the Richmond Organisation, said in a telephone interview to New York Times on the judgment day.

In a statement, Ludlow said royalties from the song since the early 1960s had been donated to the non-profit Highlander Research and Education Centre in Tennessee, which created the We Shall Overcome Fund to distribute all of the royalties within black communities through grants and scholarships.

“Without the same scope of copyright protection, Highlander's grants and scholarships will be deeply affected in the future,” the statement, said.

Ludlow said that uses of the song had in the past been "carefully vetted" but warned that its words and melody could now be used by advertising agencies and others “in any manner they wish, including inaccurate historical uses, commercials, parodies, spoofs and jokes, and even for political purposes by those who oppose civil rights for all Americans”.

A lawyer for the plaintiffs, Mark C. Rifkin, said. “We're really thrilled to be part of an effort to give this song back to the public where it belongs,” he said. On the other hand Waldstein legal partner Randall Newman said in a statement “We were able to prove that any contribution the defendants made to the song as to which the evidence was equivocal at best lacked originality and was not copyrightable.” He also added “We are extremely pleased with the court's ruling today giving this iconic Civil Rights song back to the public.

The settlement was a big and a very important achievement because other creative composer, filmmakers and other creative people can now use the universal song without paying for it or seeking permission.