London Mayor Sadiq Khan also warned the protestors if they start to overstretch the patience of the police, more actions are going to follow, as they are limiting the ability of the police to respond to daily crime. 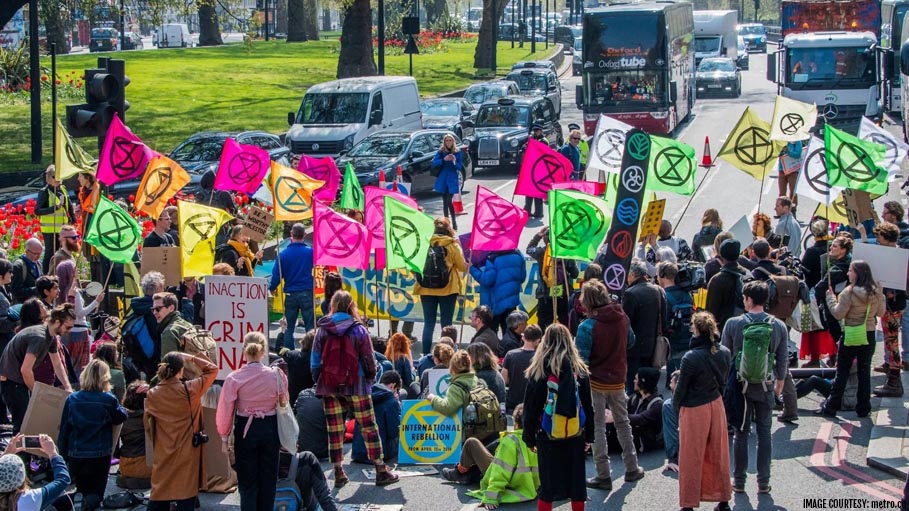 Police are struggling to reopen some of London’s busiest streets, as climate change protesters are using them as platforms to regroup and plotting a new course of protests. So far police have arrested more than 1,000 protestors, who are protesting to have a healthy environment.

The protestors, who call themselves ‘Extinction Rebellion’, took over the heart of London last week in order to attract global attention on rising temperatures and sea levels caused by greenhouse gas emissions.

The weeklong protest in London has attracted forceful police action leading to several arrests this week as the local businesses have claimed that they have incurred a heavy loss in their sales.

Police had made 1,065 arrests and charged 53 people since the first protests took place at a bridge and renowned London intersections like Piccadilly and Oxford Circus last week.

London Mayor Sadiq Khan also warned the protestors if they start to overstretch the patience of the police, more actions are going to follow, as they are limiting the ability of the police to respond to daily crime. Khan said, “It simply isn’t right to put Londoners safety at risk like this”.

On Monday, ‘Extinction Rebellion’ organizers moved to Marble Arch, a monument on the edge of Hyde Park, which allows limited protests to continue without disrupting traffic. The police have also sanctioned the site to the protestors.

While in a statement the group said, “After leaving four of five locations in good order, rebels will meet at Marble Arch on Monday to decide where they go next”.

Meanwhile, Police in a statement said, “We remain in frequent contact with the organizers to ensure that the serious disruption to Londoners is brought to a close as soon as possible and that only lawful and peaceful protests continue”.

The London campaign has no leaders and therefore their immediate plan of action remains unclear. Some of the organizers said they want formal talks with the London mayor and the UK government.

The group was established in Britain last year by a group of academics that used social media platforms to become one of the fastest growing environmental movements in the world. The demands of the group include a reduction in greenhouse gas emissions to a net level of zero by 2025 and a halt to biodiversity loss.