Dolly Parton has succeeded in adding another feather to her overloaded cap. She has earned two Guinness World Records for her chart-topping music thus adding another accolade to her long career. 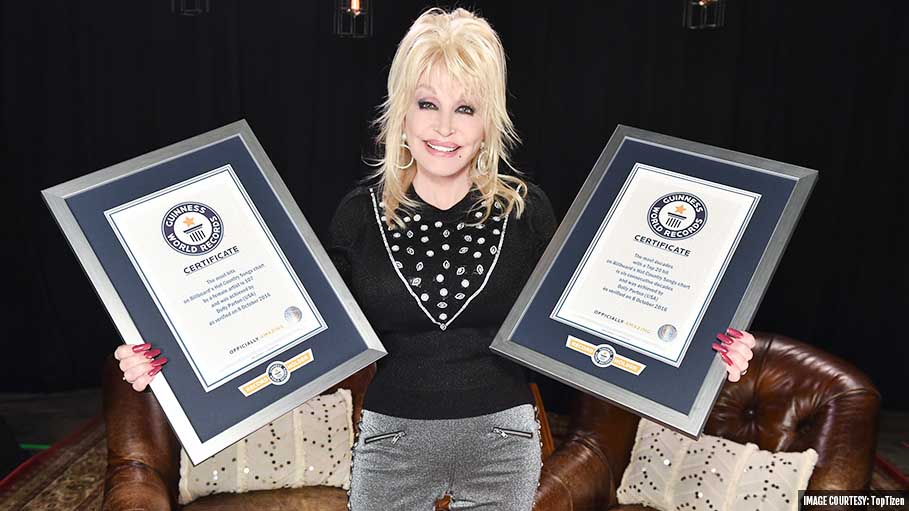 Dolly Parton has succeeded in adding another feather to her overloaded cap. She has earned two Guinness World Records for her chart-topping music thus adding another accolade to her long career. Guinness World Records awarded her the world record for “Most decades with a Top 20 hit on the US Hot Country Songs chart” as well as “Most hits on the US Hot Country Songs chart by a female artist."

The legendary singer has been on the TOP 20 list for six decades. She  entered the TOP 20 way back in 1967 with the song ‘Something fishy” and her reign continued to 2016. She had  released an updated version of “Jolene” recorded with Pentatonix.

It’s also an honor which cannot be easily earned. Parton is will be holding to this honour  for some time. That is only if  someone topples her record,and that  someone would need to have 73 consecutive top 20 hits. That’s not an easy feat to achieve.

The singer has begun 2018 with a bang.She has been honored by the Emmys, Guinness World Records and the Recording Industry Association of America.

The Emmys honoured Parton for her work on Smoky Mountains Rise, it was a  telethon that raised more than $9 million for the My People Fund,and the money raised was used to help the Nov. 28, 2016, Gatlinburg,  wildfire victims.

She will also be presented the Governors’ Award for outstanding achievement in community service during the ceremony.

Dolly Parton’s I Will Always Love You, and Jolene garnered digital sales and streams that have crossed more than 500,000. The Recording Industry Association of America  awarded its gold certification to her recordings.

It is a reported that Parton was also  awarded for the recording of I Will Always Love You. This was originally sung by Whitney Houston.

Dolly Parton, turned 72nd on January 19th and we hope she adds some more awards to her ever growing kitty.