Director Glenn Weiss took the audience by surprise when he proposed his girlfriend Jan Svendsen during his acceptance speech at the Emmys 2018. He accepted an award for outstanding direction, a variety special award for his direction of the 2017 Academy Awards. Read on. 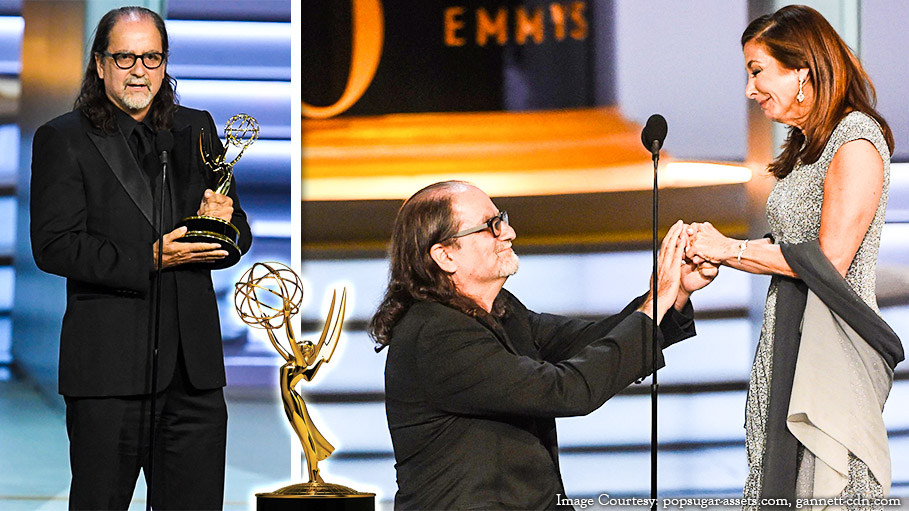 The 2018 Emmy Awards which was hosted by ‘Saturday Night Live’ comedians Colin Jost and Michael Che was quite eventful. Australian comedian Hannah Gadsby known for her stand up special ‘Nanette’ on Netflix grabbed the attention of the masses with her light hearted jokes at the event. Next in line was actor and director Donald Grover aka Childish Gambino of ‘This is America’ fame who turned up at the awards in a creepy white face disguise. The white face disguise is actually ‘Teddy Perkins’ a character who Glover plays in Atlanta TV series. It was quite a transformation!

The highlight of the Emmys however was when Director Glenn Weiss came up on stage to accept his award for outstanding direction for his work on 2017 Oscars. He began by thanking his daughters, his friends, team Oscars and not to forget his mother who passed away just two weeks back. He was teary eyed when he spoke about his mother. At this juncture, he said that the person who would’ve been most proud was his mother. Sadly, she passed away just two weeks ago. In his acceptance speech he revealed that he was broken-hearted and he was not sure if he would ever heal from this pain.

Weiss’s girlfriend was totally shocked! She was seated at her place speechless and in disbelief. After a few moments she made her way up the stage, while the audience were cheering and shouting for the couple in the background. All of a sudden the atmosphere in the place turned euphoric.

Svendsen joined Glenn on stage. The Director joked “This is the ring, my Dad put on my mom’s finger, sixty seven years ago and to my brothers and sisters, I didn’t swipe it. Dad knows I have it. Ok!! He knelt down and popped the question and of course she said yes! Glenn Weiss took the opportunity to make the best speech ever and his lady love was evidently bowled over by his act.

“You wonder why I don’t call you my girlfriend? Bc I want to call you my wife.”SHOOK! We love a grand #Emmy proposal

EMMY PROPOSAL WINS EVERYTHING ANYTIME EVER

A proposal on live tv, beat that! Cheers to this adorable couple

Man that was the best speech ever! #emmys2018