Facebook has access to all your Android call data and sms history. The Cambridge Analytica controversy is followed by a panic across global Facebook users that the social media platform might take advantage of their personal data. 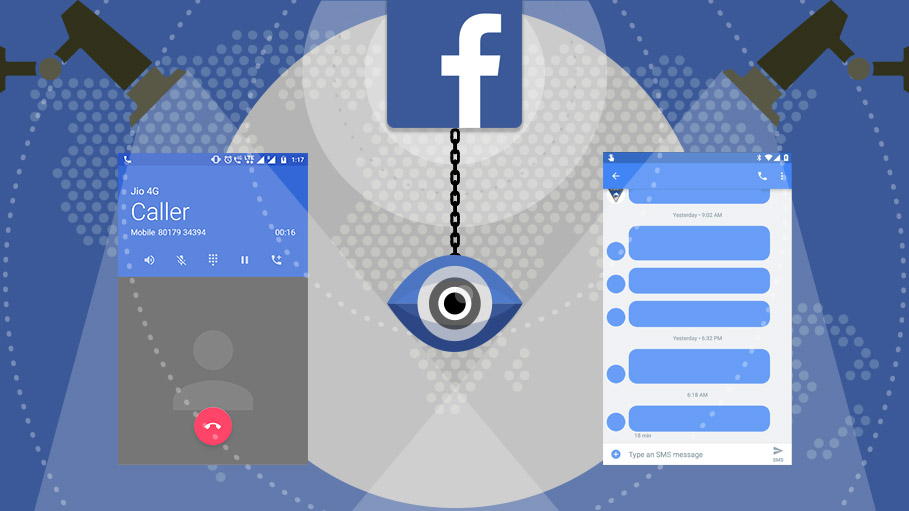 If you are an Android user, you must know that Facebook has access to all your Android call data and sms history. The Cambridge Analytica controversy is followed by a panic across global Facebook users that the social media platform might take advantage of their personal data.

Facebookers are getting freaked out all over the world. The Cambridge Analytica controversy revealed, a massive data breach that exploited its 50 million users, during US President Donald Trump’s election campaign in 2016.

Recently, Facebook’s privacy policy is in question and so is every Facebook user’s private life. And especially, if your phone is Android platform based. Facebook can track all your call data, contact upload and messaging history. A simple example will help you understand better.

Facebook shows you Friend suggestions at times and sometimes you’ve surprised to find that many of them are from your recently uploaded contacts. Isn’t it? That’s because, Facebook is eyeing you 24x7- whom you’re talking to over phone, whom you’ve messaged or whom you’ve just added to your contact list. Yes!

But according to Facebook there’s nothing to freak out at all and this is nothing against their policy. This is an Opt-in option and you, yourself has allowed Facebook to keep a check on your phone data.

When you attempted to install the Facebook or Facebook Lite app on your phone, you got a request from Facebook that seeked to peek into your phone logs. You chose ‘Allow’ and that’s how the ‘eye-spy’ happened. But why does Facebook need your phone data? According to the social media giant, to enhance your Facebook experience and build a better networking between you and your friends.

“This lets friends find each other on Facebook and helps us create a better experience for everyone,”.

But, how safe you are as an Android Platform based Facebook user? According to Facebook, it is safe. Facebook doesn’t read your messages, doesn’t overhear your conversations or doesn’t even sell your data to any third party. It’s solely used to provide you a better experience on Facebook. Plus, this what they added to it, “Contact importers are fairly common among social apps and services as a way to more easily find the people you want to connect with.”

But, people are not ready to calm down after the Cambridge Analytica scandal.

“Facebook have spying on us all this time. I downloaded my Facebook profile zip file. I can't believe what I found. All my contacts that were on my phone, the phone calls, messages, even the duration of the calls. #deletefacebook”

Although, iPhone users are on a safer side. On Apple devices, security locks are quite stringent and no app can intrude into your phone data, just like that.

Now, you might want to bar Facebook from keeping an eye on your daily phone activities. Here’s what you can do:

Tap on your profile picture from Home in the top right corner > People > Synced Contacts. For Facebook Lite users, tap on the three-line icon > App Settings > Continuous Contacts Upload. Finally, tap on Sync Your Call and Text History and turn the setting on or off. (courtesy: Forbes article)

Do these events mark the downfall of the social media giant called Facebook, in future? Share your opinions in the comments below!

No Facebook, No Fake Profiles - Ban on the Social Media Giant