It was in the 1980s when local authorities had decided to sink 25,000 tyres into the crystal clear waters of the Mediterranean to create a sanctuary for the sea life, however, it failed! 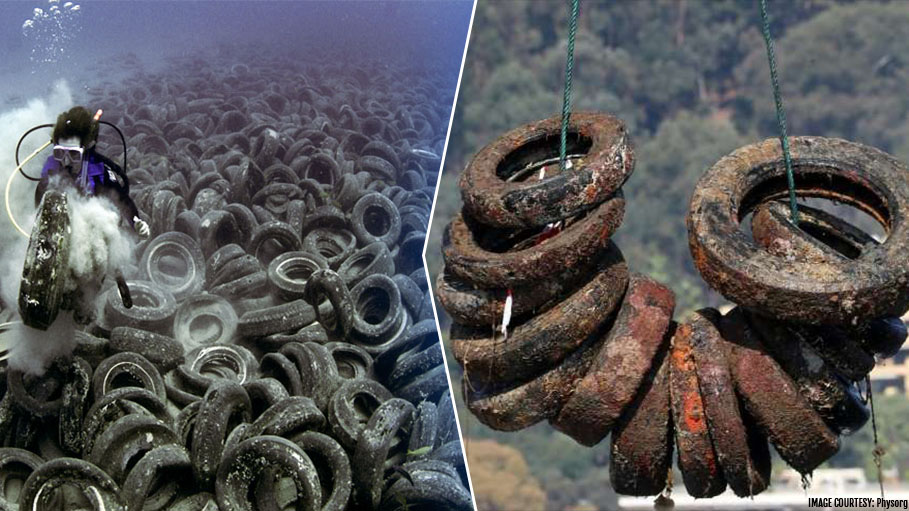 A team of divers in France is tirelessly working to lift an artificial reef, which is made by using tens of thousands car tyres in the seafloor of the south of France, as it was found spreading pollution from the toxic chemicals. The whole operation is costing more than a million euros which is 1.1million dollar. The whole operation is now funded by the government and the tyre manufacturer Michelin.

In the process of removing the tyres, the divers are being helped by a boat with all kinds of lifting equipment. As the fish had been avoiding the area, there is little chance of disturbing the environmental balance.

There was a time when the reef was seen as a double solution for everyone, as a way to get rid of old tyres and also creating habitats for marine life and stimulating marine organisms to grow on rubber.

It was in the 1980s when local authorities had decided to sink 25,000 tyres into the crystal clear waters of the Mediterranean to create a sanctuary for the sea life, 1,640 feet from the shore between Antibes and Cannes on the French Riviera. But in the year 2005 researchers have found that the tyres were leaking some chemicals, which also includes some heavy metals, which are a risk to both human life and the environment.

The original idea was that tyres would help and can create an environment to be populated by coral and other sea creatures. The idea was backed by local authorities at the time and fishermen, but it failed.

Eric Duplay, who is the deputy mayor of Antibes accepted the hopeful experiment failed miserably, “We hoped back in the 1980s that we could restore aquatic life there, but it didn't work. It turns out that the tyre reef was not a prolific place for biomass”.

Later, the experts also alerted that the stacks of tyres could collapse or disintegrate anytime, which can also disturb life in the area. So a first set of some 2500 tyres were removed in the year 2015, while 10,000 set to be lifted in the coming weeks and more next year.

Denis Genovese, who is the head of an association of local fishermen, though the idea was good the natural habitants couldn’t accept it for good, Genovese said, “grouper fish, conger eels and sea bream swim around them, but no species really got used to it”.

In France, the idea of a tyre reef is experimented only in this area but the locals who are working on the cleanup operation confirm that artificial reefs using tyres have also been sunk in other parts of the world, like in the United States but all have failed. Some tens of thousands tyres had been removed from the seabed at Fort Lauderdale near Florida. In the 1970s, around Gibraltar currents washed the tyres away.

This time 10,000 tyres are set to be lifted by the divers and boat crew over the next few weeks, while the remaining 12,500 tyres will be extracted in the year 2019.