The Global Fund to Fight AIDS, Tuberculosis and Malaria raised $14.25 billion Wednesday at a donor conference led by US President Joe Biden, as decades of progress against the diseases are set back by Covid. 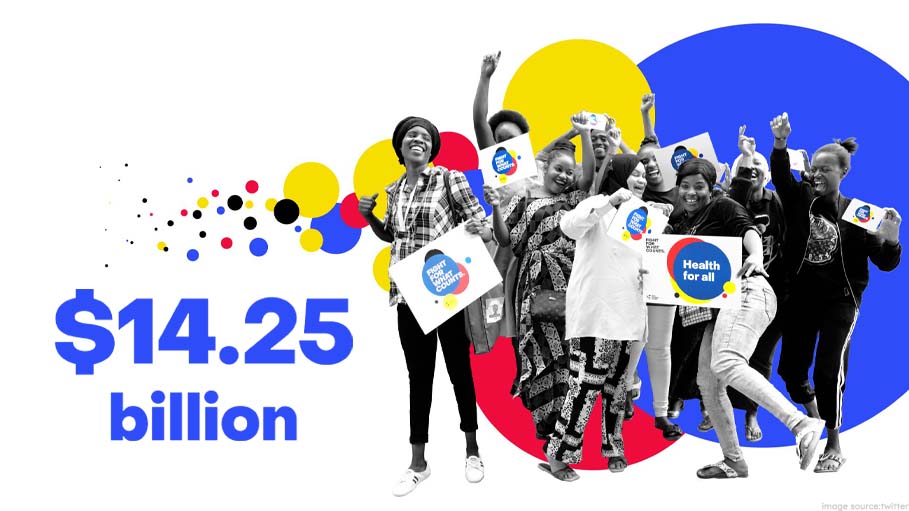 New York: The Global Fund to Fight AIDS, Tuberculosis and Malaria raised $14.25 billion Wednesday at a donor conference led by US President Joe Biden, as decades of progress against the diseases are set back by Covid.

It was the highest amount ever pledged for a multilateral health organization -- but fell short of the ambitious goal of $18 billion after the United Kingdom and Italy said their pledges would come later.

The Global Fund was created in 2002, bringing together governments, multilateral agencies, civil society groups and the private sector.

"What's happened today is actually an unparalleled mobilization of resources for global health," said Global Fund executive director Peter Sands, adding he expected the two countries to make their pledges in due course.

"Thank you all for stepping up, especially in a challenging global economic environment, and I ask you, keep it going," urged Biden. "Let's finish this fight together."

Among countries, the United States pledged the highest amount, $6 billion, followed by France with 1.6 billion euros, 1.3 billion euros by Germany, $1.08 billion by Japan, Can$1.21 billion by Canada and 715 million Euros by the European Union.

The $18 billion target was based on getting back on track to end AIDS, TB and malaria by 2030, recovering ground lost during the Covid pandemic and saving 20 million lives over the next three years.

It was 30 percent more than that raised during the organization's sixth and most recent replenishment, hosted by President Emmanuel Macron of France in 2019, which raised a then-record $14 billion.

World Health Organization head Tedros Adhanom Ghebreyesus highlighted how life expectancy in Japan was 84 years, while in Lesotho it was just 50.

"Much of that difference is due to the fact that HIV, TB and malaria still kill millions in the poorest communities of the poorest countries," he said.

"Thanks in large part to the Global Fund, these diseases kill half as many people now as they did 20 years ago. That's quite a progress. However, those gains are at risk."

The fund estimates it has reduced the death toll from AIDS, TB, and malaria by 50 percent, saving more than 50 million lives.

Last year the Global Fund warned that the pandemic was having a devastating impact on its work, leading to declining results across the board for the first time in the fund's history.

It said last week however that the massive resources it had pumped into countering the downturn had paid off and "recovery is underway" against all three diseases.

The number of people dying from TB rose for the first time in a decade in 2020, when it caused an estimated 1.5 million deaths, making it the world's second-biggest infectious disease killer behind Covid.

But the Global Fund, which provides 76 percent of all international financing for fighting TB, said the programs had shown signs of recovery last year.

Similarly, the number of people provided with HIV prevention services rose again after dropping in 2020, reaching 12.5 million people worldwide, the organization said. The fund provides nearly a third of all international financing to battle HIV.

Interruptions in health services during the pandemic also extracted a heavy toll on the battle against malaria, sending deaths soaring 12 percent in 2020, to an estimated 627,000.

But the Global Fund said a rapid scale-up of programs had allowed them to bounce back, with some 280 million suspected cases tested and 148 million cases treated last year.

Per an act of Congress, the United States cannot provide more than one-third of funding for the Global Fund -- a limit that serves as a matching challenge to other nations to double the American pledge.