Google Maps is a wonderful traveller’s guide to help you reach your destination with ease. If you have used the app, you must have seen that driving, walking and biking directions have a navigation mode. 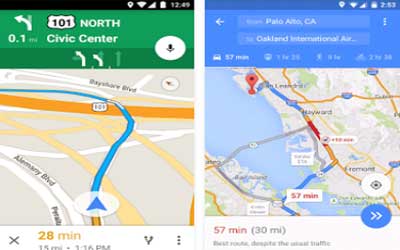 If you are using the navigation service on Android phones, Google Maps now will offer departure times, estimate when you'll arrive and alert you when you are at your bus stop or have to shift to another train line. For years, Google Maps has shown progress with respect to driving, but this release helps make public transit more convenient as well. Especially when you are on unfamiliar routes or visiting new cities, the transit directions will come absolutely handy.Walk-Through of the latest Google Maps for Android

Let me give you an insight into what you get with the latest version of Google Maps for Android.  When you select a transit route, you will find a new "start" button at the bottom of the screen, along with the familiar navigation icon. When you click the start button, the next step in your journey becomes a stickied, ongoing notification. The old transit mode was just a list within Google Maps, which made multitasking on your phone quite irritating. If you happen to use public transport such as bus or train, you would rather be reading a book, surfing through a website, texting, or playing a game, but the anxiety of possibly missing your stop would have you constantly opening Google Maps again to check on your progress. With the notification, you can now easily see where you are without leaving the current app.

The notification doesn't just tell you what the next step is, it also has a set of arrow buttons on the right that let you flip through steps in your direction list. If you're on a subway with no GPS, you can check on your next steps without having to open Google Maps again. Google will try to tell you your next step automatically, though. Just like for driving, when it's time to move to the next step, you'll get a pop up notification telling you to move on. This can be a notification telling you to get off the bus or train or when to transfer.

Features of Google Maps for Android

Google Maps 9.66.1 APK for Android is the latest downloadable version and has the following features:

Since Google confirms that the feature is for "Google Maps for Android", we should be hopeful that an iOS version will be coming our way soon. So here’s to enjoying a stress-free transit, kudos to Google Maps team.

Google or Apple? Which is a Better Choice for Navigation?