Hope for Human Copy with the Cloning of Monkey

For the first time in the world, the scientists in China have been successful in cloning monkeys using the technique used to produce Dolly, the sheep two decades before. 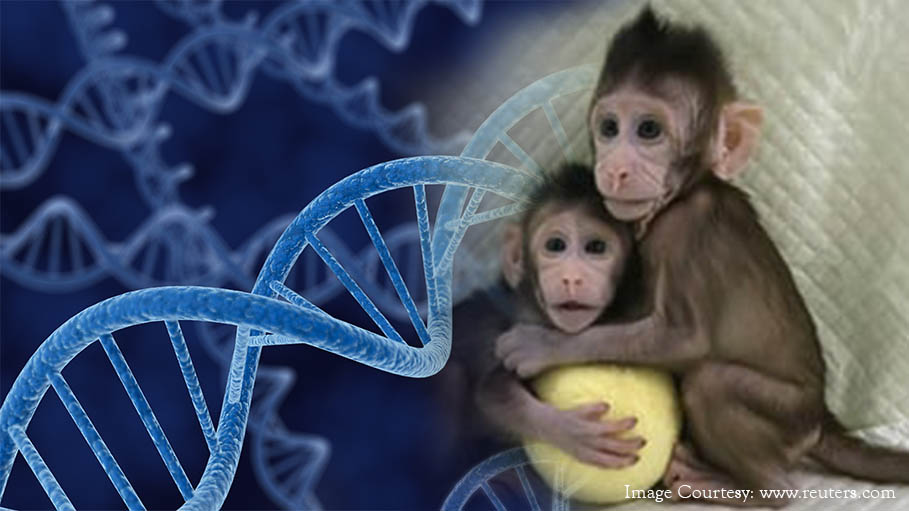 For the first time in the world, the scientists in China have been successful in cloning monkeys using the technique used to produce Dolly, the sheep two decades before. Now Researcher’s are hopeful that this discovery will break the technical barrier and in future open the door to clone human beings too.

The monkeys – Zhong Zhong and Hua Hua two identical long-tailed macaques now eight and six weeks old respectively, who are now at the neuroscience arm of the Chinese Academy of Sciences in Shanghai are the first primates - the order of mammals that includes monkeys, apes and humans to be cloned.

The same method was used more than 20 years ago in Edinburgh to create Dolly, the sheep from a single adult udder cell. Cats, dogs, rats and cows are among 23 species of mammal also to have been cloned in this way.

Total 127 eggs, where required to produce this two live macaque births. The two monkeys were part of a total of 79 different transfer attempts, which used different techniques. It took 21 surrogate monkeys, which had only six successful pregnancies, for the two cloned monkeys to be born. Another pair created from the DNA of a live adult failed to survive.

Scientist and Researchers associated with the Chinese Academy of Sciences Institute of Neuroscience, where the study is done are excited about their work, which is going to be a boon to medical research by making it possible to study diseases in populations of genetically uniform monkeys.

The success is credited to reprogramming of the genes of the cloned embryos which allow them to develop properly in the womb, which is achieved through a process called somatic cell nuclear transfer (SCNT), which involves transferring the nucleus of a cell, where the DNA was taken from a macaque foetus cell, put in an egg and fertilized artificially to form an embryo later born to a surrogate mother.

Dolly, the sheep made history 20 years ago after being cloned at the Roslin Institute in Edinburgh. It was the first time scientists had been able to clone a mammal from an adult cell, taken from the udder.

Since then many other mammals have been cloned using the same somatic cell nuclear transfer technique (SCNT), including cattle, pigs, dogs, cats, mice and rats.

Similar research work in primates, however had always failed, leading some experts to wonder if primates were resistant. The new research, which is published in the scientific journal - Cell, shows that is not the case and that it also can be possible on primates.

This technique also brings the hope of cloning of human beings a near reality. But scientists caution that there is no good reason to create such clones and that ethical and legal questions need to be answered before undergoing such research.

The scientists say they followed strict international guidelines for animal research, set by the US National Institutes of Health.

Though the successful cloning of monkey also means that it would be theoretically easy to clone a human, since primates share so much of their makeup with human beings. Dr Muming Poo, who helped supervise the programme at the institute, told the media. "Humans are primates. So (for) the cloning of primate species, including humans, the technical barrier is now broken," However he has also made it clear “The reason we broke this barrier is to produce animal models that are useful for medicine, for human health. There is no intention to apply this method to humans.”

More immediately, the technique will allow researchers to create whole labs full of genetically identical monkeys. That could prove tremendously useful in scientific and medical research – allowing doctors to watch how specific treatments affect the genetic makeup of animals that are otherwise exactly the same, for instance.

As Qiang Sun, the Director of the Nonhuman Primate Research Facility at the Chinese Academy of Sciences Institute of Neuroscience said the cloned monkeys would be useful as a model for studying diseases with a genetic basis, including some cancers, metabolic and immune disorders.

“There are a lot of questions about primate biology that can be studied by having this additional model,” he said.

“The cloned monkeys with the same genetic behaviour without manipulating the gene will generate real models not just for genetically based brain diseases, but also cancer, immune or metabolic disorders, and allow us to test the efficacy of the drugs for these conditions before clinical use.” said Dr Qiang Sun, who led the team that produced the research published in the journal Cell.

The primate models are necessary for studying complex human diseases and disorders, they could be used to test new drugs for a range of diseases from Parkinson’s to HIV/AIDS to autism before clinical use.

The two newborns are now being bottle-fed and are growing normally in an incubator in Chinese Academy of Sciences, with more macaque clones to join them in coming months.