Inside Thailand Cave Moments, the ‘Wild Boars’ Shared Their Experiences

A large audience, which also includes family, friends, relatives, and doctors, greeted the boys aged between 11 to 16 years and their 25-year-old coach. 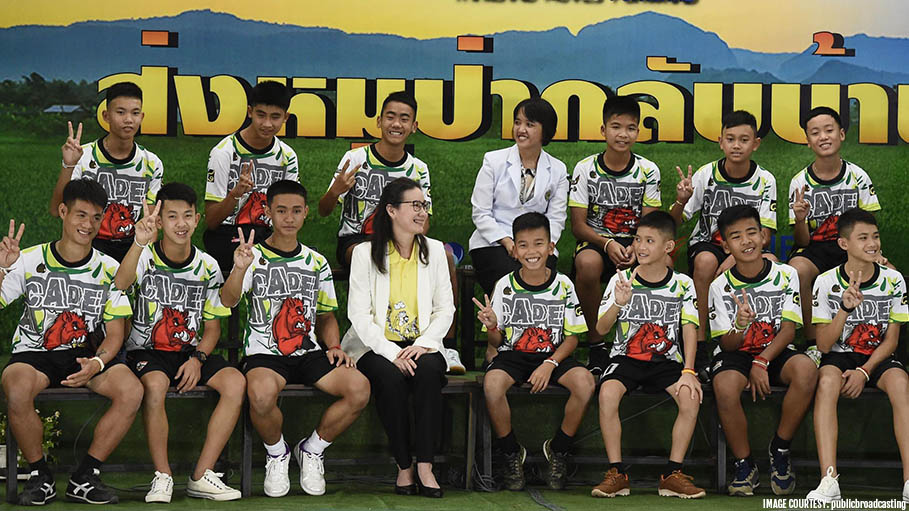 The first time, after they are rescued from the flooded cave in Thailand, the 12 boys and their coach shared their ordeal during their first public appearance. The team came on the set dramatically wearing T-Shirts designed with a graphic presentation of wild boars and carrying footballs, which they kicked gently. All the 12 boys were a soccer team known as “Wild Boars”.

A large audience, which also includes family, friends, relatives, and doctors, greeted the boys aged between 11 to 16 years and their 25-year-old coach. They arrived in vans directly from the hospital they had stayed since their rescue after the international effort to rescue the boys from the flooded cave complex in which they had been trapped for days.

The crowd cheered as the boys entered the set and shared their struggling days inside the cave, one by one. One boy said, “I told everyone fight on, don't despair”, describing how the group had to battle every day to stay alive during the harrowing days spent in the cave in Thailand's northern province of Chiang Rai.

Adul Sam, the 14-year-old boy remembered the moments when the British divers found them inside the cave, said, “It was magical. I had to think a lot before I could answer their questions”. It was after the two British divers discovered the team inside the cave, the rescue operation started, otherwise they would have starved to death, therefore for all the 12 children it was a magic moment.

Another interesting fact which the coach Ekkapol Chantawong shared was the order in which boys later left the cave with the support of the rescue team didn’t depend on the state of health, rather, “the ones whose homes are the furthest went first, so they could tell everyone that the boys were fine”, he said.

The coach also said, before the rescue operation started, the team started their effort to came out of the cave, as they have started digging the cave walls, “We took turns digging at the cave walls. We didn't want to wait around until authorities found us”. Another boy in the team added, “We used stones to dig in the cave. We dug 3 to 4 metres”. But their efforts yielded no result. The coach said, “almost everyone can swim, but some are not strong swimmer”. So they didn’t take risk of swimming not knowing the depth of the water inside the cave.

The team survived on waters only, as they didn’t have food with them. They depended on water derived from stalactites in the cave. One of the boys, named Tee said, “We only drank water. On the first day we were OK, but after two days we started feeling tired”. The youngest member of the team Titan, also said, “I had no strength. I tried not to think about food so I didn't get more hungry”.

All the boys also apologized to their parents for being naughty and also admitted having told their parents that they are only going to play football and not shared their plan to go into the caves. On June 23rd, the group and the coach had planned to explore the Tham Luang cave complex for about an hour after their practice. But unfortunately, the rain that struck immediately after they entered, flooded the tunnels and trapped them for days.