A heart-breaking video showing a US Marine lifting a baby over a razor wire-topped wall at Kabul's airport caught global attention Friday, amid the chaos of thousands trying to flee Afghanistan newly controlled by the Taliban. 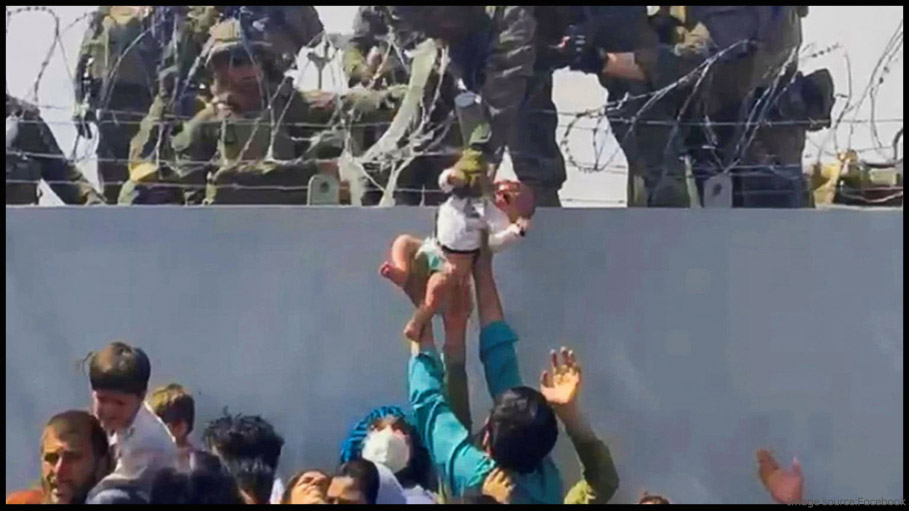 Washington: A heart-breaking video showing a US Marine lifting a baby over a razor wire-topped wall at Kabul's airport caught global attention Friday, amid the chaos of thousands trying to flee Afghanistan newly controlled by the Taliban.

The video, which shows the infant, its diaper slipping off, being pulled up by one arm high above a crowd of Afghans seeking to enter the airport, took over social media nearly one week into the airlift to evacuate foreigners and Afghans from the war-torn country.

It put a tender edge on the tense evacuation, in which nearly 6,000 heavily armed US troops have taken control of the airport, while their long-time foe the Taliban patrol the streets outside and begin to exercise what many fear will be a harsh and anti-American rule.

The chaos & fear of people is a testament to the international community’s role in AFG’s downfall & their subsequent abandonment of Afghan people. The future for AFG has bn decided for its people without its people’s vote & now they live at the mercy of a terrorist group. #Kabul pic.twitter.com/k4bevc2eHE— Omar Haidari (@OmarHaidari1) August 19, 2021

Pentagon spokesman John Kirby said the Marines were told the unidentified baby was sick and were asked to help.

"The video you are talking about -- the parent asked the Marines to look after the baby because the baby was ill," he told reporters.

"So the Marine you see reaching over the wall took it to a Norwegian hospital that is at the airport. They treated the child and returned the child to the child's father," he said.

"It was an act of compassion because there was concern about the baby."

He said he did not know who the family was, or their status -- whether or not they had been accepted to immigrate to the Untied States under a special program for Afghans who worked for the Americans or were otherwise at high risk from the Taliban.

While the video of that act appeared to be independently filmed, the US military released several other officially approved photographs of soldiers helping out children of people hoping to escape Afghanistan.

In one, a soldier in his combat gear sits with a blanketed baby in his arms, smiling at the child like the father of a newborn, while his fellow soldiers stand nearby on alert.

In another, two female American soldiers hold babies in their arms.

Still another depicts one of the US troops giving water to a little boy.

"This is the America we need to be," said US congressman and military veteran Peter Meijer on Twitter of the images.

The official Pentagon images stood out amid a stark lack of independently taken pictures from inside the airport, where thousands of people waited Friday amid difficult conditions to board US C-17 cargo aircraft bound for Qatar.

In the Gulf state, they will still face days of waiting to be cleared by US immigration officials.

SEE ALSO:
"Please Let Us on The Bus": Heartbreak on Afghanistan Airport Convoy