NASA spacecraft Juno on its mission to Jupiter has collected new data which unravels some of the swirling inner Enigmas of the gigantic and gorgeous gas-planet. Read the whole story here. 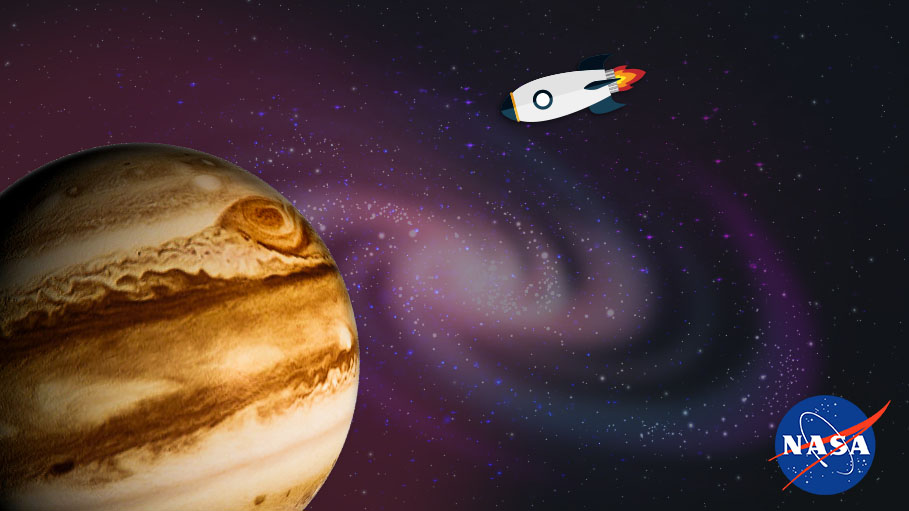 ‪‪NASA spacecraft Juno on its mission to Jupiter has collected new data which unravels some of the swirling inner Enigmas of the gigantic and gorgeous gas-planet. In the latest pictures captured, the poles of the planet look like portals to hell. It’s unknown, however, how these storms hold their shape without merging into one another. How they were started and evolved to the current configuration is also unclear. At both poles, the cyclones are locked in polygonal formations. The north pole has an octagonal structure, and the south pole has a pentagon shape. The next step is to build simulations to study the mechanics behind these storms.

The surface of Jupiter, the fifth planet from the sun and the largest in the solar system, consists of alternating bright and dark bands of gas and winds flowing in opposite directions at massive speed. Previously there have been extensive studies of the planet's surface constituting of helium and hydrogen, but now gravity measurements collected by Juno indicate that this turbulent outer layer extends to a depth of 1,900 miles (3,000 kilometers).

Galileo Noticed the Stripes on Jupiter more than 400 Years Ago

Yohai Kaspi, Juno co-investigator from the Weizmann Institute of Science, Rehovot, Israel, and lead author of a Nature paper on Jupiter's deep weather layer, was quoted as stating on NASA's website that Galileo viewed the stripes on Jupiter more than 400 years ago. Until now, we only had a superficial understanding of them and have been able to relate these stripes to cloud features along Jupiter's jets. Now, following the Juno gravity measurements, we know how deep the jets extend and what their structure is beneath the visible clouds as per Yohai, who likened the advancement to going from a 2-D picture to a 3-D version in high definition.

The computer-generated image shows the structure of the cyclonic pattern observed over Jupiter's south pole. Like in the North, Jupiter's south pole also contains a central cyclone, but it is surrounded by five cyclones with diameters ranging from 3,500 to 4,300 miles (5,600 to 7,000 kilometers) in diameter.

Scientists believe the ongoing mission's findings, which have been published in four papers in Nature, will improve understanding of Jupiter's interior structure, core mass and, eventually, its origin.Among the mission's discoveries is that massive cyclones that surround Jupiter's north and south poles are enduring atmospheric features and unlike anything else encountered in the solar system, the NASA report said.According to Luciano, Juno co-investigator from Sapienza University of Rome, and lead author on a Nature paper on Jupiter's gravity field, Juno's measurement of Jupiter's gravity field indicates a north-south asymmetry, similar to the asymmetry observed in its zones and belts.

On a gas planet, such an asymmetry can only come from flows deep within the planet; and on Jupiter, the visible eastward and westward jet streams are likewise asymmetric north and south.The deeper the jets, the more mass they contain, leading to a stronger signal expressed in the gravity field. Thus, the magnitude of the asymmetry in gravity determines how deep the jet streams extend.

Jupiter’s Interior Rotates as a Solid BodyThe the planet's interior rotates as a solid body, despite its fluid nature."This is really an amazing result, and future measurements by Juno will help us understand how the transition works between the weather layer and the rigid body below," said Tristan Guillot, a Juno co-investigator from the Université Côte d'Azur, Nice, France, and lead author of the paper on Jupiter's deep interior.

JIRAM (Jupiter InfraRed Auroral Mapper), an infrared camera, and JunoCam, a visible light camera, snapped pictures when Juno passed close to the largest planet. From August 2016 to March 2017, the spacecraft carried out six flybys. Juno was launched in 2011 and entered Jupiter’s orbit in 2016. It flies approximately 4,000 kilometers above the clouds and can zip from the pole to the equator in about two hours.

Juno is expected to continue its mission until July, later this year. Scientists believe that Juno's discovery has implications for other worlds in our solar system and beyond.

Life on Mars? Ice Found on Red Planet Can be Used for Human Sustenance in Future

NASA: Flying a Helicopter on Mars for First Time