Nuclear Reactor in Next Mars Mission

If one has to stay in Mars for a longer period than a few days of stays for exploration and experiments, then they will need power. A successful test by NASA recently found that the power could be nuclear power. 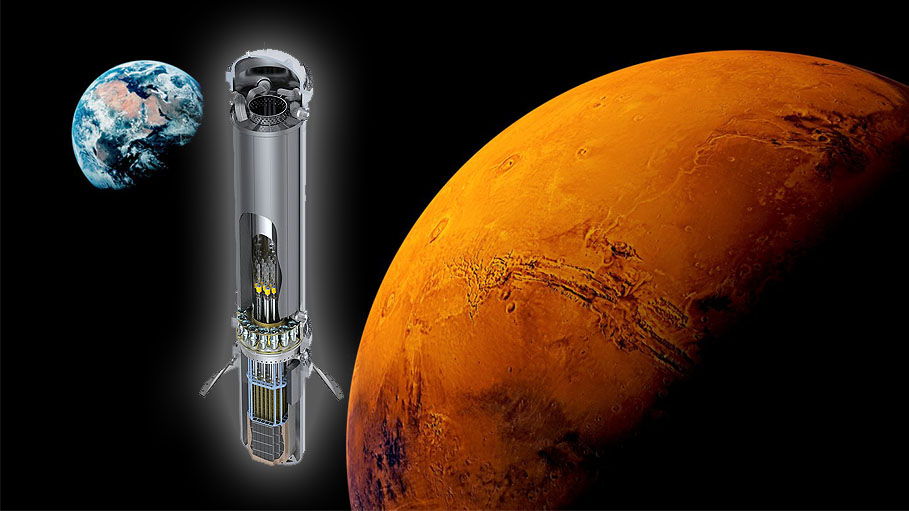 Conquest of Mars and subsequent discoveries in the planet suggested life is possible in Mars, but if one has to stay in Mars for a longer period than a few days of stays for exploration and experiments, then they will need power. A successful test by NASA recently found that the power could be nuclear power.

As, solar panels are extremely inconvenient and do not work in high latitudes, nights and dust storms. Fossil fuels on the other hand are more impractical as they are very heavy to carry to a longer destination after more scientific tests. Finally NASA came to the conclusion to carry a small reactor into the space.

NASA in a statement has said that it has successfully conducted the tests on the fission reactor, which can provide enough energy to power two houses. It believes that a group of four would be sufficient for a Mars base and would keep going for a decade or more.

Speaking at the reactor’s launch event, Steve Jurczyk, said: “Mars is a very difficult environment for power systems, with less sunlight than Earth or the Moon, the temperature during night is very cold and has a different kind of dust storms which lasts for weeks and months covering the whole planet.”

The new reactor’s size and strength allows the agency to “deliver multiple units on a single lander to the surface that provides tens of kilowatts of power”, Jurczyk added.

The power supply through the nuclear reactor is less risky and consumes less fuels. This makes it more efficient than solar power systems, which require consistent sunlight to work.

A small nuclear reactor might sound like something little or less powerful, but it has all the properties necessary for powering a human habitat on another planet. It can produce a lot of power relative to their size and weight and they’re highly reliable source of generating power.

The nuclear reactor system is between five and six feet tall, but the uranium-235 nuclear fission core is about the size of a paper towel roll. Heat from the reactor is distributed by a series of sodium heat pipes. The heat generates power via a high-efficiency stirling engine, which drives a mechanical flywheel and piston via the repeated expansion of gases. By coupling the engine to an alternator, the system produces power.

The new reactor uses a full fission reaction of the kind found in power stations on the national grid. NASA will begin testing in the spring. If the reactors work they will allow high latitude landing sites to be considered and reduce the logistical headache of coping with fluctuating solar energy.

Named, Kilo power Project, the small-scale reactor produces power in the 1-10 kilowatt range, as the name implies. One kilowatt is about what one needs to power a toaster or a few laptops. Though that is not enough to power an entire Mars habitat. NASA estimates suggests, one would need 40-50kW of power, so it may send several small KRUSTY devices if it cannot develop a single reactor that can reach the necessary power levels.

The reactor is developed in association with the Los Alamos laboratory, where much of the United States early nuclear research was conducted. Months-long testing began in November at the energy department’s Nevada National Security Site, with an eye towards providing a energy for future astronaut and robotic missions in space and on the surface of Mars, the moon or other solar system destinations.

This will be the first nuclear fission reactor to reach space since the SNAP 10A project in the 1960s. A prototype is in testing, which makes it closer to launch than any of the other projects that popped up in the intervening decades. The Kilo power nuclear reactor is designed to operate at two sizes, a one-kilowatt (1,000 watt) model and a 10-kilowatt model.

When we talk about Nuclear, a Nuclear reactor means something that is a reason of worry for everyone, if something goes wrong during the launch, the nuclear power source onboard could prove hazardous to those standing below.

“People always think you’re going to fly Chernobyl into space or something,” Pat McClure, Kilopower project lead at Los Alamos says. The reality is far less dangerous. “Before you fission a reactor there are some minor amounts of radioactivity that exist in the core, because it is uranium, but it’s very small. If something were to happen in a launch accident, it's really not going to present a problem to the public,” McClure says.

McClure also explains if something goes wrong with a launch, the exploded remnants of uranium in the reactor's standard, un-fissioned state would pose very little danger to the public. Also NASA is not planning to send a manned mission to the red planet until the 2030s at the earliest.

So far NASA and the U.S. Department of Energy has successfully performed the initial tests on the miniature nuclear power system and will try a more developed test in March, to fuel a dream of an off-world future for humanity.