Pope Francis solemnized a marriage mid air. On board The Papal Plane, the Pope solemnized the marriage of a couple of airline employees as the plane flew some 36,000 feet over Chile. 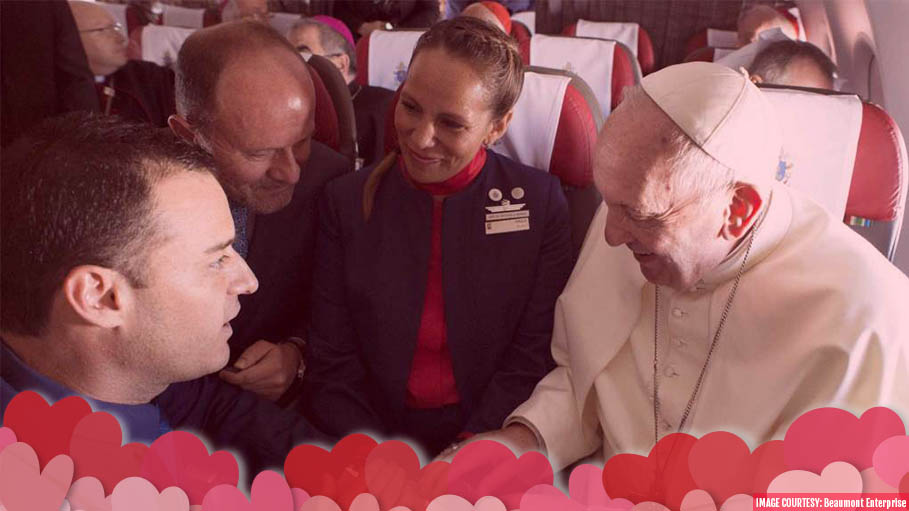 It is for the first time, Pope Francis solemnized a marriage mid air. On board The Papal Plane, the Pope solemnized the marriage of a couple of airline employees as the plane flew some 36,000 feet over Chile.

On the third day of his South American trip Pope Francis was on a two-hour short flight from Santiago to the northern city of Iquique, when the historic marriage took place.

Quite unexpectedly, it all started when the pair, Paula Podest Ruiz and Carlos Ciuffardi Ellorriaga, began chatting with the pontiff during a group photo shooting session arranged by the aviation company on board with the pope, while they were seated next to him. During the conversation Pope Francis asked the couple are both of them married as they beautiful together as couple. The couple then told him they are together for last 8 years but never married as the church where they were scheduled to tie the knot was destroyed, when the 2010 Chile earthquake hit.

After the chat Pope Francis called the couple and asked them would he arrange for the catholic wedding for them, to which they gave their consent. He once again asked them if they wanted him to officiate their wedding, there and then. To which the couple said yes and without much delay, the Pope took the couple’s love to new heights by marrying them in the sky on board the plane.

Pope Francis then formally solemnized the marriage of 41-year-old Carlos Ciuffardi and Paula Podest, 39, who also have two children and are both of them are flight attendants for airline Latam. In 2010 the Chilean couple while working fell in love and married in a civil ceremony but were never formally wed according to the rights of the Catholic Church, but what they waited for 8 long years, happened in the bleak of the moment with blessing from none other than the Pope himself. The brief marriage ceremony took place at an altitude of 11,000 meters setting a record of its own.

The excited couple speaking to the media and journalists on the papal plane, said that it was Pope Francis' idea to marry them. He first asked them, "Are you sure?" They responded, "Okay!"

During the marriage, the two employees of the airlines co-signed a handwritten marriage certificate as witness, which bore the pope's simple signature "Francis".

According to Vatican City officials it marks as a historic as for the first time a pope has married a couple on a papal plane. Vatican spokesman Greg Burke has officially confirmed that the pope had married the couple in a religious ceremony on board the Papal Plane. "Something which can be called total extraordinary, has happened where the hostesses and the stewards of the plane met the Pope during a photo shoot and Pope then married them in a religious ceremony”. He also added that it was something that has "never happened on a papal plane before."

According to the couple, Pope Francis then blessed their rings and then said, "We need a witness." Carlos turned around and asked his boss, the CEO of the airline, to serve as witness.

Then the Pope asked his cardinals to draft the paperwork. One cardinal aboard the flight drafted the wedding certificate on a sheet of paper from the airline writing by hand. Pope Francis, the couple and the witness then signed the document, thereby officially declaring them man and wife forever.

As marriage blessings Pope Francis gave the groom a black rosary and the bride a white rosary. At one point the Pope asked Carlos, "Is she still the boss?" Carlos the groom, laughed and answered, "Yes, she is."

“He told me our marriage historic, that there has never before been a pope who married someone aboard a plane,” Carlos told journalists aboard the flight.

After much applause in the flight and afterwards the couple had a breakfast of croissants, fruits, coffee and tea and when the plane landed in Iquique, the couple bid the crew and passengers farewell. The couple now plans to celebrate their special wedding with their coworkers in Iquique and then have a "tiny honeymoon," somewhere else declared the groom Carlos. They fly back home with a remarkable story to tell to their children and other family members.