Pope has given Fake News a new definition of Satan! 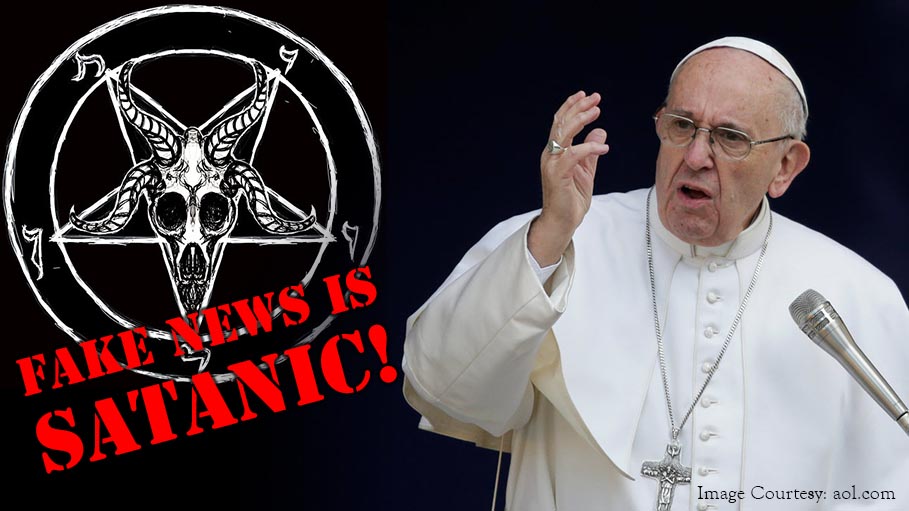 In this information age the race for breaking news has evolved a new kind of news business, Fake News as it is known and which has done more wrong than good. Gradually it has become a major issue of concern and is therefore for the first time Pope Francis came out in open against Fake News. He also gave some tips and lessons for those associated with News business, how to work and how not to play with fire.

Though Pope has given Fake News a new definition of Satan, but has urged journalists and social media users to shun and unmask manipulative snake tactics, which are done to create division in order to serve political and economic interests, reminding that it is not best in the interest of humanity and truth. Francis said in the first document release by the Vatican on behalf of pope on the subject, “Fake news is the symbol of intolerance and hypersensitive attitudes which only leads to the spread of hatred and arrogance and therefore the final result is only untruth.”

The document was issued after months of debate on how much fake news may have influenced the 2016 US presidential campaign and the election of President Donald Trump. “Spreading fake news can serve to advance specific goals, influence political decisions, and serve economic interests,” the pope wrote, condemning the “manipulative use of social networks” and other forms of communication, which on the other hand if turned around can work wonder for the human kind.

“This false but believable news is 'captious', in as much as it grasps people's attention by appealing to stereotypes and common social prejudices and exploiting instantaneous emotions like anxiety, contempt, anger and frustration,” Francis said.

False stories spreads very quickly that even authoritative denials often could not cope with the damage done and many people run the risk of becoming “unwilling accomplices in spreading biased and baseless ideas”.

Pope therefore has stressed the need for education of truth that would help people to evaluate and understand news in order to recognize the deceitful and dangerous nature of it, which led its way directly into the heart with false and seductive arguments.

Pope Francis also pointed the harmful effects of fake news quoting the famous story of Adam and Eve from the Bible, where the Evil in disguise of a serpent convinced Eve to eat the fruit from the forbidden tree, saying the fruit would make her and Adam as all knowing as God, fed her with the wrong information.

The pope also stressed need to unmask what could be called the 'snake-tactics' used by those creator of fake news who disguise them in order to strike suddenly at any point of time or at any place.

Vatican spokesman Greg Burke told Reuters Television “The Pope is not saying that all journalists are snakes but he is certainly acknowledging that they can be, He said the job of a journalist is “not just a job, but it is a mission”.

The pope reminding the role of Journalists and writers as a noble and social profession and said the role of journalists is "not just a job, it is a mission" and they had particular responsibility to stem fake news. He added “amidst feeding wrong information and the mad rush for a breaking news, the reporter or the journalist must understand that the soul of information is not the speed with which it is reported or its audience impact, but persons.”

Giving direction how to deal with it, Pope the teacher also said journalism should be “less concentrated on breaking news than on exploring the underlying causes of conflicts a journalism committed to pointing out alternatives to the escalation of shouting matches and verbal violence.”

Since becoming Pope, Francis has learned to use the media to get his message across, but what pains his heart sometimes is the one-sided reporting and what he dubs the “sins of the media disinformation, slander and defamation.”

During his recent trip to Chile and Peru, Pope Francis faced the worst protests of his five-year papacy. He was accused of appointing a bishop, covering-up for Chile’s most notorious pedophile priest and was badly criticized by the Chilean media during the trip.

The meaning of Fake News according to Wikipedia is a new type of Propaganda or Yellow Journalism that consists of intentional misinformation or wrong news, which are spread through traditional print, broadcast news media and online social media. Fake news are created with the sole motive to mislead in order to create damage to an agency, entity, or person, and gain financially or politically, often using sensationalist, dishonest or wrong intentional headlines to increase the viewership, readership, online sharing and to earn Internet click revenue. In the latter case, it is similar to sensational online “click bait” headlines and relies on advertising revenue generated from this activity, regardless of the veracity of the published stories. On the other hand the intentional and misinterpreted fake news is different from obvious satire or ridicule, which is intended to humor with a lesson rather than mislead the audience.

The importance of fake news has increased in this era of competitive politics and with the expansion and utility of technology, the need for views, likes and ratings has also been increasing at a higher pace. Media organisation also has to attract viewers to their websites, which is also a necessity to give them going and also in order to convince the advertisers that they pay for advertising on their websites. Therefore the rush and focus is into publishing a story with wrong information and false content attract a large number of viewers, thereby benefiting the advertisers and stakeholders.

SEE ALSO:
Pope Francis Says No To Fake News And Yes To Journalism Of Peace