Port Workers Open Shipping Container after 40 Days. Inside Was a Bruised Dog

Workers at Panama's Atlantico port were in for a shock when they opened a shipping container that had arrived from Spain and was meant to be empty. 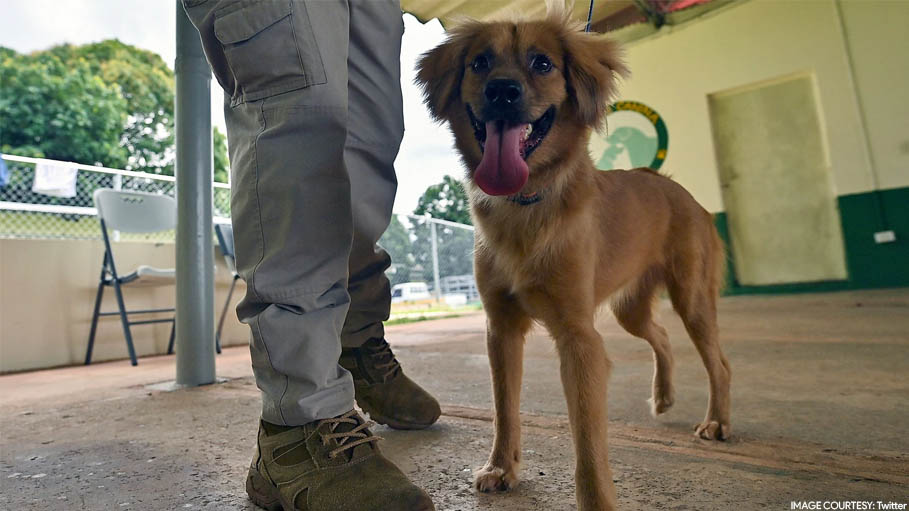 Panama City: Workers at Panama's Atlantico port were in for a shock when they opened a shipping container that had arrived from Spain and was meant to be empty.

Inside was a dog, still alive despite having been trapped for 40 days while the container crossed the Atlantic from Andalucia.

The caramel-colored dog, approximately one year old, was skinny, dehydrated and bruised.

Now, after months of rehabilitation and training, Mili has gotten a job at the MIDA agricultural development ministry.

"We don't know how she got in, nor how she wasn't detected," said Cecilia de Escobar, the national director for animal health at the ministry.

"It's the story of a heroine because a little animal that is inside a container for 40 days, with no water, no food, how did it fight for its life?"

The December 2021 oceanic voyage had lasted 20 days before the container sat at the port in hot and humid Panama for another 20 days in January.

"A part of the container was corroded and there we found a little hole. We assume she opened the hole with her paw and drank rain water."

Both during the journey and in Panama, there was plenty of rain.

After her discovery, Mili was taken to Panama City and treated by vets and quarantine specialists.

She weighed just nine pounds (4kg) when she arrived, said Hugo Turillazzi, a vet and administrator in the canine unit at MIDA.

Turillazzi believes Mili was in good physical shape when she entered the container and managed to survive off her body fat.

In addition to the rain water, she could have licked the condensation off the container's inner walls or even drunk her own urine.

"It's a miracle that this little animal was able to survive so long, that's why we gave her the name Milagros (miracles) or Mili for short", he said.

"And as she came from Spain we called her Mili the little Spaniard."

During the five months after her discovery, Mili spent time recovering and being trained at the ministry's canine unit.

Having learned to detect the aromas of fruit and vegetables, Mili began working a week ago "with good results."

Dogs in her unit work at the capital's international airport, detecting fresh food in travelers' luggage to prevent outside diseases entering the country.

Whenever she detects a suspicious piece of luggage, she scratches it and then sits down beside it waiting for her reward.

"Mili has the four basic characteristics that a canine needs to join the unit: friendly, gentle with people, a good appetite and playful," said dog trainer Edgardo Aguirre.

"We told ourselves: this little dog has potential, she will be able to make seizures."

Mili has already managed to detect grains, fruit and charcuterie.

She is now training to detect the giant African snail, a species that can ravage local agriculture.

"She's a scanner that doesn't cost very much, only the food and affection that we give her, and she's very trustworthy," said Turillazzi.

Now Mili is the one helping those that rescued her.

"They say that everyone has a purpose in life, and I feel that Mili's was to be adopted by Panama and to provide a great service to our country," said De Escobar.