Congress president Mallikarjun Kharge and party leader Rahul Gandhi appealed to all party workers in the state to extend every possible assistance in the rescue work. 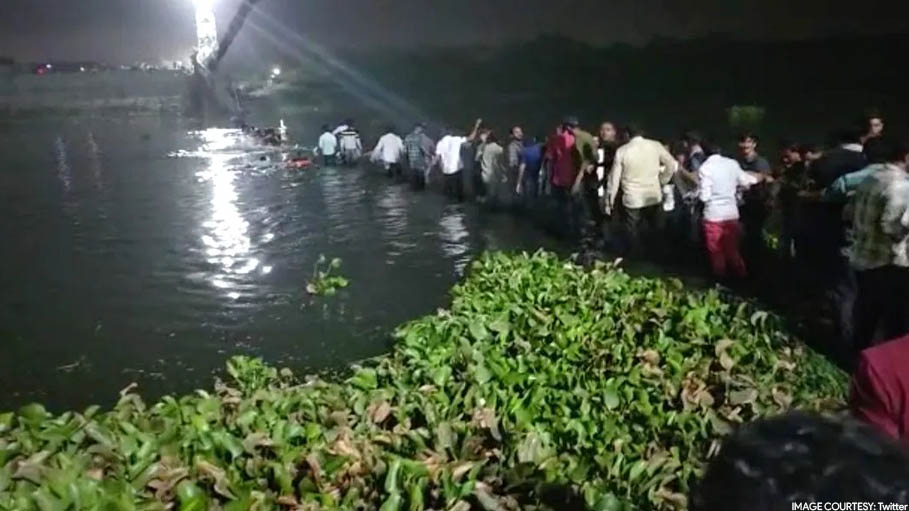 Congress president Mallikarjun Kharge and party leader Rahul Gandhi appealed to all party workers in the state to extend every possible assistance in the rescue work.

However, some party leaders slammed the BJP over the incident with Randeep Srujewala terming it a "man-made tragedy."

Senior Congress leader Digvijaya Singh asked if the incident was an "act of God or an act of fraud" while alluding to a phrase that Prime Minister Modi had reportedly used at a rally lampooning the Mamata Banerjee government in West Bengal after the Vivekananda Road flyover collapsed in Kolkata on March 31, 2016, killing many.

Vice President Jagdeep Dhankhar prayed for the safe rescue of all.

"Distressed to hear about the tragic incident in Morbi, Gujarat. I pray for the safe rescue of all and the speedy recovery of those injured. My thoughts are with the affected families," the Vice President Secretariat said in a tweet quoting Dhankhar.

Prime Minister Modi announced a compensation of ₹ 2 lakh for the families of each of those who died in the incident, his office said.

Expressing sadness, PM Modi, in a tweet said he has spoken to Gujarat Chief Minister Bhupendra Patel and officials.

"Relief and rescue operations are going on in full swing and all necessary assistance is being provided," the prime minister said.

President Murmu, in a tweet, said, "The tragedy in Morbi, Gujarat has left me worried. My thoughts and prayers are with the affected people. Relief and rescue efforts will bring succour to the victims."

Delhi Chief Minister Arvind Kejriwal, whose Aam Aadmi Party is making an all-out effort to dislodge BJP from power in the poll-bound state, tweeted, "Very sad news coming from Gujarat. Many people are reported to have fallen into the river after a bridge collapsed in Morbi. I pray to god for everybody's life and well-being."

The nearly century-old suspension bridge on the Machchhu river collapsed around 6.30 pm owing to too many people standing on it following its reopening just four days ago after renovation.

According to eyewitnesses, there were several women and children on the hanging bridge when it snapped. A fire department official said that boats were being used to rescue people from the river.

A private operator had carried out the repair work of the bridge for nearly six months before it was reopened to the public on the Gujarati New Year day celebrated on October 26.

"Isn't this a straight criminal conspiracy? How did the BJP government allow the bridge to be opened for public use without a 'fitness certificate'," Congress leader Surjewala asked.

Was this done in a hurry in a bid to garner votes before the model code of conduct comes into effect, he posed, adding "How was the work of repairing the bridge given to the company/trust? Do they have connections with the BJP?" Union Home Minister Amit Shah expressed sadness at the incident in Morbi.

In a tweet, he said that he has spoken to the home minister of Gujarat, Harsh Sanghvi, and other officials in this matter.