Cristiano Ronaldo on Friday signed for Al Nassr of Saudi Arabia, the club announced, in a deal believed to be worth more than 200 million euros. 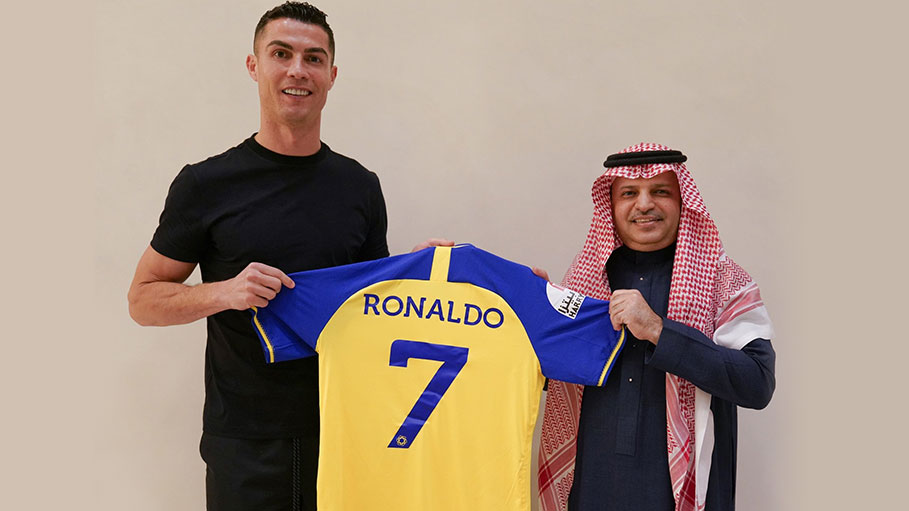 Cristiano Ronaldo on Friday signed for Al Nassr of Saudi Arabia, the club announced, in a deal believed to be worth more than 200 million euros. The 37-year-old penned a contract which will take him to June 2025. "I can't wait to discover a new football league in a different country," said the former Manchester United, Real Madrid and Juventus player. The Portuguese star was pictured on the Al Nassr Twitter feed holding a blue and yellow shirt with his favoured number seven printed on the back.

"The vision with which Al Nassr operates is very inspiring, and I am delighted to join my teammates, so that together we can help the team achieve greater success," he added.

"This is more than history in the making. This is a signing that will not only inspire our club to achieve even greater success but inspire our league, our nation and future generations, boys and girls to be the best version of themselves. Welcome @cristiano to your new home @alnassr_fc," tweeted the Saudis.

Ronaldo heads to the Gulf after a year that saw him relegated to the bench for Portugal and cut adrift by Manchester United.

United parted ways with the Portuguese star after the veteran forward gave an explosive TV interview in which he said he felt "betrayed" by the club and had no respect for coach Erik ten Hag.

United terminated his contract while Ronaldo was with Portugal at the World Cup.

Ronaldo's quest for a World Cup winners' medal started well as he became the first player to score in five global tournaments when he converted a penalty in their win against Ghana.

But he was left out of the starting line-up for their last-16 clash as Portugal ripped Switzerland apart.

When Portugal lost to Morocco in the quarter-finals, he started on the bench and ended the tournament in tears.

Ronaldo has long been one of the top-paid players in football.

His salary was a reported 31 million euros at Juventus, although the Turin club's accounts are being investigated for possibly under-reporting what they paid players.

While he took a pay cut to rejoin United, with reports putting his basic annual salary somewhere between 15 million and 28 million euros, before bonuses, that still made him one of the best-paid players in Europe.

As his relationship with United soured, Ronaldo was linked to a string of Champions League contenders including Chelsea, Bayern Munich and Napoli.

A return to his first club Sporting in Lisbon was also rumoured. There was talk of a move to the MLS to join Inter Miami, part-owned by former United team mate David Beckham. None of those deals came to fruition.

United decided his diminishing contribution coupled with his growing and public dissatisfaction made him a pricey luxury they no longer needed.

For Saudi Arabia, Ronaldo is the latest high-priced sporting jewel acquired to add lustre to their international image.

Dustin Johnson reportedly signed a contract worth up to 125 million dollars and them won more than 35 million, including bonuses, in eight tournaments.

Saudi Arabia has staged heavyweight boxing title bouts, has hosted a Formula One grand prix the last two years as well as the Dakar Rally.

The Public Investment Fund of Saudi Arabia acquired Premier League club Newcastle in 2021 and is being linked with Manchester United.

Ronaldo has long been in competition with Lionel Messi for the titles of greatest player and biggest earner in football.

Messi pulled away from Ronaldo on the field by winning a World Cup, but the sums of money the Portuguese star will reportedly receive in Riyadh, far surpasses what the Argentine is making from Paris Saint-Germain.

He is also the top scorer in the Champions League and with the Portuguese national team with whom he won Euro 2016.