Russian troops advanced in eastern Ukraine on Tuesday, pounding key cities and aiming "to destroy everything there," President Volodymyr Zelensky said, as Moscow signalled it was digging in for a long war against its neighbor. 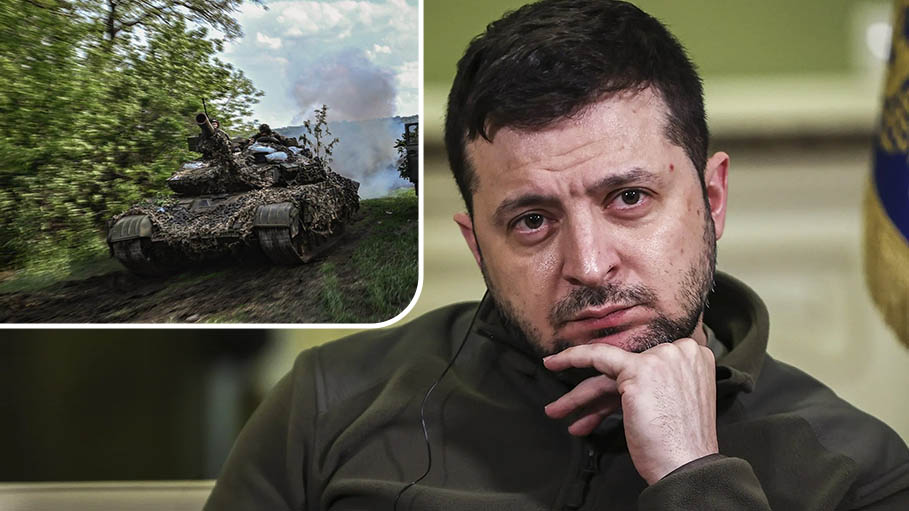 Kyiv: Russian troops advanced in eastern Ukraine on Tuesday, pounding key cities and aiming "to destroy everything there," President Volodymyr Zelensky said, as Moscow signalled it was digging in for a long war against its neighbor.

Three months to the day since Russia launched its invasion, Zelensky mourned the thousands of Ukrainian men and women who have perished and he renewed calls for heavy weapons from foreign partners saying arms for Kyiv were "the best investment in stability in the world."

Sergiy Gaidai, governor of the eastern region of Lugansk, said Russian forces were bombarding the industrial city of Severodonetsk with air strikes, rockets, artillery and mortars in an effort to solidify control over the province and move further into Ukraine.

"The situation is very difficult and unfortunately it is only getting worse. It is getting worse with every day and even with every hour," Gaidai said in a video on Telegram. "The Russian army decided to completely destroy Severodonetsk."

He added: "They are simply erasing Severodonetsk from the face of the earth."

In Moscow, Russian Defence Minister Sergei made it clear Russia was bedding in for a long war in Ukraine.

"We will continue the special military operation until all the objectives have been achieved," Shoigu said, using Moscow's name for the war.

In his daily address to the nation late Tuesday, Zelensky called the situation in Donbas "extremely difficult," saying Russian forces were mounting a massive assault on Severodonetsk and several other cities.

"All the strength of the Russian army which they still have was thrown there for the offensive," Zelensky said. "The occupiers want to destroy everything there."

Supplying Ukraine with rocket-propelled grenades, tanks, anti-ship missiles and other weapons is "the best investment in maintaining stability in the world and in preventing many serious crises that Russia is planning or has already provoked," Zelensky said.

"The longer this war lasts, the greater will be the price of protecting freedom not only in Ukraine, but also in the whole free world."

Western funds and weapons have helped Ukraine hold off its neighbour's advances in many areas, including the capital Kyiv.

Russia is now focused on expanding its gains in the eastern Donbas region, near the border and home to pro-Russian separatists, as well as the southern coast.

In the village of Yakovlivka, 55-year-old Ukrainian soldier Andriy hid in a ditch as shells fired by encroaching Russians whistled past.

"Our guys have stopped firing back," he whispered after glancing up and down the road.

"We do not want to provoke them because then the Russians will start shooting at us even harder."

Gaidai, the Lugansk governor, said Russia had sent thousands of troops to capture his region and that Severodonetsk, with an estimated 15,000 civilians, was under massive attack.

The bombardment was so intense that it was too late for them to leave, he said.

More than six million people have fled Ukraine and eight million have been internally displaced since the war broke out, according to the United Nations.

"We are not rushing to meet deadlines," added the secretary of Russia's Security Council, Nikolai Patrushev, in an interview.

The head of Ukrainian military intelligence, Kyrylo Budanov, said delays in getting arms to the frontline had left Kyiv "catastrophically short of heavy weapons".

He said, however, that he expected a "turning point" by August, in an interview to news outlet Ukrainska Pravda.

Speaking to political and business elites at the World Economic Forum in Davos this week, Zelensky urged an international oil embargo on Russia, as well as punitive measures against all its banks and the shunning of its IT sector.

The EU has proposed a ban on Russian oil imports, although Hungary -- which imposed a new state of emergency Tuesday, citing challenges from the war in Ukraine -- is blocking the measure.

Prime Minister Viktor Orban told Brussels in a letter seen by AFP that Hungary has yet to be convinced to back an oil embargo, and that bringing it up at next week's European summit would be pointless.

The United States announced that an exemption allowing Moscow to pay foreign debts with dollars in Russia will end as of 0401 GMT Wednesday, two days before the country's next debt service payment is due.

Meanwhile, some semblance of normality returned to Ukraine's second city of Kharkiv, where the metro was reopened Tuesday after months of use as a bomb shelter.

"We decided to relaunch services because we have to relaunch the economy," Mayor Igor Terekhov told journalists, adding that train rides would be free for the next two weeks.

The Kharkiv metro, with 30 stations, has sheltered thousands of residents seeking to escape indiscriminate shelling on the city, which is adjacent to the Russian border.

Three stations in areas that are occasionally shelled remain shuttered.

Russia's Defence Ministry said the waters of the port in Mariupol -- a strategic southern city that fell after a devastating siege -- had been demined and that operations were underway to "restore the port infrastructure".

But Mariupol Mayor Vadym Boychenko warned that 100,000 people were without water, food and electricity.

Speaking to Davos via video-link, he accused Russia of behaving like a "state terrorist", and warned disease risked further fatalities.