Samsung, the South Korean multinational conglomerate headquartered in Samsung Town, Seoul, is going full on with the Internet of things, convincing that connected appliances and faster Internet speeds will result in more satisfied customers. 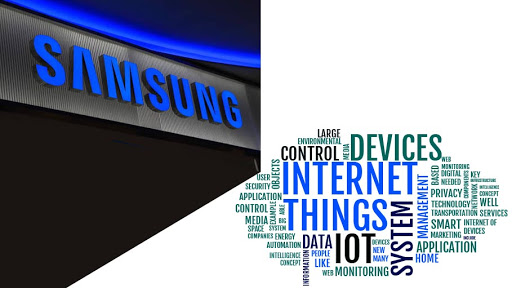 Samsung, the South Korean multinational conglomerate headquartered in Samsung Town, Seoul, is going full on with the Internet of things, convincing that connected appliances and faster Internet speeds will result in more satisfied customers. The Internet of things (IoT) is the network of physical devices, automobiles, home appliances and other items embedded with electronics, software, sensors, actuators, and network connectivity which enables these objects to connect and exchange data. Each thing is uniquely identifiable through its embedded computing system but is able to inter-operate within the existing Internet infrastructure.Samsung spokespersons, speaking at the CES 2018 technology event in Las Vegas, reconfirmed a promise made two years ago that all of the company’s products will be IOT-compatible by 2020, adding that ninety percent already are as of date. They also mentioned, that the company plans to use its existing SmartThings app to ensure that those devices can all interact with each other, from the television to the phone to the microwave oven to the refrigerator to the air conditioner to the washing machine.What does IoT imply from end users’ perspective?

It will definitely depend on which Samsung appliances consumers own. For example, if you purchase a new Samsung TV, you will no longer have to bother about entering usernames and passwords for services like Netflix, Hulu, and Spotify when you initially set it up. The login credential and related information will automatically be entered into the TV by checking other systems in which the customer is logged in, making it a more seamless and fulfilling user experience.

TV sets will also have personalized recommendations for movies, music and shows, based on a user’s overall viewing habits and preferences on all their devices. TVs will also include Bixby, Samsung’s artificial intelligent virtual assistant, and will be able to double as a central hub for smart appliances around the home, allowing users do everything from see who is at the gate to adjust the air conditioner.According to Tom Baxter, president and CEO of Samsung’s North American division, the primary objective of the drive is to create an “ecosystem of devices working together to produce unique experiences”.What steps are being taken by Samsung?

As part of the initiative, Samsung will expand the number of smart refrigerator models it sells by introducing fourteen new models that come with its integrated screen and newly expanded FamilyHub technology that lets owners stream music, leave notes to each other, and view the contents of the fridge in real time. Through Bixby, the FamilyHub will differentiate between users’ based on their voices and give custom information to them, such as their schedule for the day or commute times to school or office, flights if any, so on and so forth. “IoT is still frustrating to a lot of people, but it doesn’t need to be,” said Yoon Lee, senior vice president at Samsung Electronics.Samsung is not stopping with its own product range, either. The company is working closely with the Open Connectivity Forum, the world’s largest IoT standardization body, to have all SmartThings-compatible products work with the app. Also, Samsung has signed an agreement with a leading European auto manufacturer to extend the IoT integration with automobiles. The details will be revealed in due course.Samsung has previously tried and failed to make its ecosystem more connected. To ensure this effort is more successful, the company has invested USD 14 billion in research and development over the past year.