Director of the controversial film ‘Kashmir Files’ Vivek Agnihotri has called out all those people who criticised the movie. He has primarily called out Congress Leader Shashi Tharoor, Delhi Chief Minister Arvind Kejriwal and Author Twinkle Khanna who didn’t support the film. 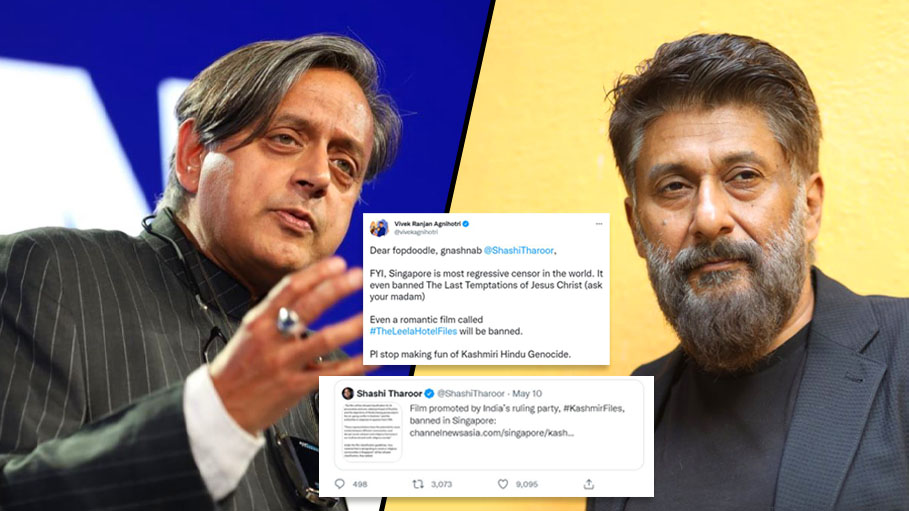 Director of the controversial film ‘Kashmir Files’ Vivek Agnihotri has called out all those people who criticised the movie.

He did this after terrorist leader Yasin Malik from Jammu and Kashmir had pleaded guilty in a terror funding case.

He questioned them whether they would still label ‘Kashmir Files’ ‘Islamophobic and half truth’ even after Yasin Malik’s arrest.

The heated row between Shashi and Vivek began when the congress leader shared a report on the microblogging site stating that the film has been banned in Singapore.

Vivek hit back at Shashi by tweeting, “Dear fopdoodle, gnashnab @ShashiTharoor, FYI, Singapore is most regressive censor in the world. It even banned The Last Temptations of Jesus Christ (ask your madam) Even a romantic film called #TheLeelaHotelFiles will be banned. Pl stop making fun of Kashmiri Hindu Genocide.”

The spat turned ugly when Vivek went a step further and decided to drag Shashi’s wife Sunanda Pushkar who is no more into the Twitter war fight.

“Hey @ShashiTharoor, Is this true that Late Sunanda Pushkar was a Kashmiri Hindu? Is the enclosed SS true? If yes, then in Hindu tradition, to respect the dead, you must delete your tweet and apologise to her soul.”

Giving his clearance Shashi said that he never saw the film and neither has he made any comments on the content of the film.

“I tweeted a factual news item this morning, with no comment on its contents or on the film “The Kashmir Files”, which I have not seen. At no point did I "mock" or disparage the sufferings of Kashmiri Pandits, of whose plight I am intimately aware, and to which I have repeatedly drawn attention over the years”, Shashi tweeted.

“Dragging my late wife Sunanda into this matter was unwarranted and contemptible. No one is more aware of her views than I am. I have accompanied her to the destroyed ruins of her ancestral home in Bomai, near Sopore, and joined her in conversations with her Kashmiri neighbours and friends, both Muslim and Hindu. One thing I know, unlike those attempting to exploit her when she is not around to speak for herself: She believed in reconciliation, not hate.”

‘Kashmir Files’ did commercially well and went on to become the most successful commercial movie after the Covid-19 Pandemic. It addresses the sufferings of Kashmiri Pandits and is based on the Kashmiri Pandit exodus in the disputed region in Kashmir.

That being said, many critics have pointed out that the film is one sided, lacks balance, and didn’t focus on the overall history of human rights abuses in the state.

SEE ALSO:
Shashi Tharoor is Cleared of All Charges in the Sunanda Pushkar’s Death Case

The Usage of Word ‘Kerfuffle’ by Shashi Tharoor While Sharing Vacation Pics, Creates a Stir on Twitter