South Africa has registered a total of more than 100,000 Covid deaths, according to official figures released Wednesday, but actual fatalities are believed to be much higher. 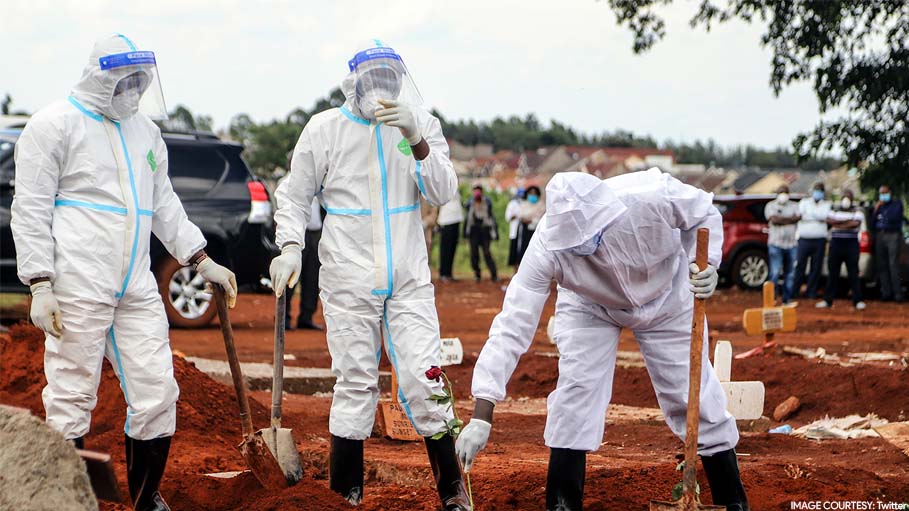 Johannesburg: South Africa has registered a total of more than 100,000 Covid deaths, according to official figures released Wednesday, but actual fatalities are believed to be much higher.

Data released by the National Institute for Communicable Diseases showed a total of 100,020 fatalities had occurred since the start of the pandemic two years ago.

The institute reported 44 deaths on Wednesday, but only six were from the past two days, while the rest were discovered during an ongoing government audit.

Covid-19 fatalities are estimated to be higher than officially reported, with researchers saying they could be triple the reported figures.

Data compiled by the South African Medical Research Council shows that there have been over 300,000 excess deaths from natural causes since the pandemic hit.

"Since 3 May 2020, there has been a cumulative total of 303,400 excess deaths from natural causes of persons all ages," the council said in a report on Tuesday.

The excess deaths data is derived from an estimate of fatalities that might be expected to have occurred without a pandemic, according to the methodology employed by the government-funded but independent research group.

"Although more data are needed on the underlying causes of (natural) death, (the) observation is strongly supportive that a significant proportion of the current excess mortality being observed in South Africa is likely to be attributable to Covid-19," it said in a report on its website.

According to the council, 85,000 of the excess deaths occurred during the first year of the pandemic, 203,200 occurred last year, while more than 15,000 have occurred so far this year.

South Africa is the continent's hardest hit country, counting more than 3.7 million coronavirus cases or more than 30 percent of Africa's over 11.3 million cases.

But it is due to destroy some 92,000 Pfizer vaccines what are expiring on Thursday, health ministry said in a statement.

It will be the first time South Africa -- where 30 percent of the population is fully inoculated -- discards Covid vaccines, as uptake "wanes", government said.

Another nearly 900,000 doses are due to expire in May while 5.8 million are facing expiry in June, with another 4.8 million reaching their use-by date in July.

President Cyril Ramaphosa last week rolled back most of the remaining coronavirus restrictions as new infections fell and fewer deaths were reported.