SpaceX Successfully Placed a Satellite in Its First Commercial Launch

The shiny silver satellite took only 34 minutes after the launch for its successful deployment. Staffs of the first formal private space programme cheered and clapped in the control room, as the satellite has established itself on the space. 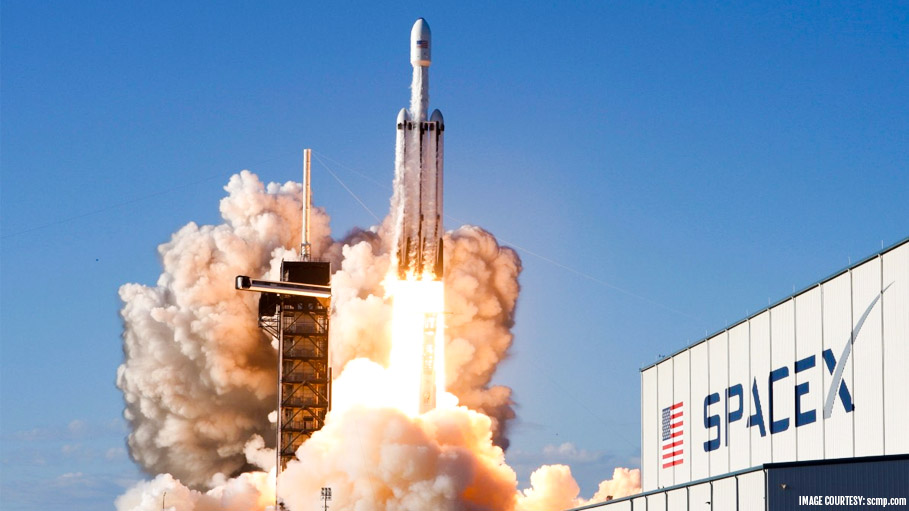 SpaceX has successfully launched its first commercial Falcon Heavy rocket into the orbit with a Saudi telecoms satellite. The bright white rocket rose with a roar, leaving behind thick gray smoke on the ground as it made its way into the clear blue sky over the Cape Canaveral, Florida, followed by a long line of orange fire.

The shiny silver satellite took only 34 minutes after the launch for its successful deployment. Staffs of the first formal private space programme cheered and clapped in the control room, as the satellite has established itself on the space. SpaceX later informed, the Falcon Heavy rocket exerts 5.1 million pounds of thrust, which is more than that of a dozen jetliners.

The Falcon Heavy was initially scheduled to take off from the Kennedy Space Center but was delayed because of strong winds in the upper atmosphere.

The rocket also carried with it a Saudi Arabian satellite operated by Arabsat. The six-ton Arabsat-6A satellite is successfully placed into the geostationary orbit, which is about 22,500 miles (36,000 kilometers) above the Earth. The satellite is designed to provide television, telephone, Internet and secure communications to its customers in the Middle East.

Less than 10 minutes into the flight, the rocket’s three boosters detached from the Falcon Heavy as per the schedule. As planned two of them safely landed back on pads at Cape Canaveral. The third booster landed, as per the plan on a barge out in the Atlantic, as the SpaceX webcast commentator officially declared, “Three for three boosters today”.

SpaceX has so far developed two operational rockets, the Falcon 9, which with 21 launches in 2018 dominates the US market and the Falcon Heavy, which is designed to lift much heavier payloads into more distant orbits. It is equivalent to three Falcon 9 rockets combined together, tripling its thrust.

In its first test launch in February 2018, Falcon Heavy placed a dummy dubbed Starman behind the wheel of Musk’s roadster, which is currently orbiting the Sun somewhere between Earth and Mars.

After the success of SpaceX space programmes for two years on test runs, the US military and other private clients have signed contracts with SpaceX for future Falcon Heavy launches. NASA also has indicated for its future missions to the Moon, Falcon Heavy may be used.