UK Climate Change: The study found that extreme heat events across Europe had increased even more than had been estimated by climate models. 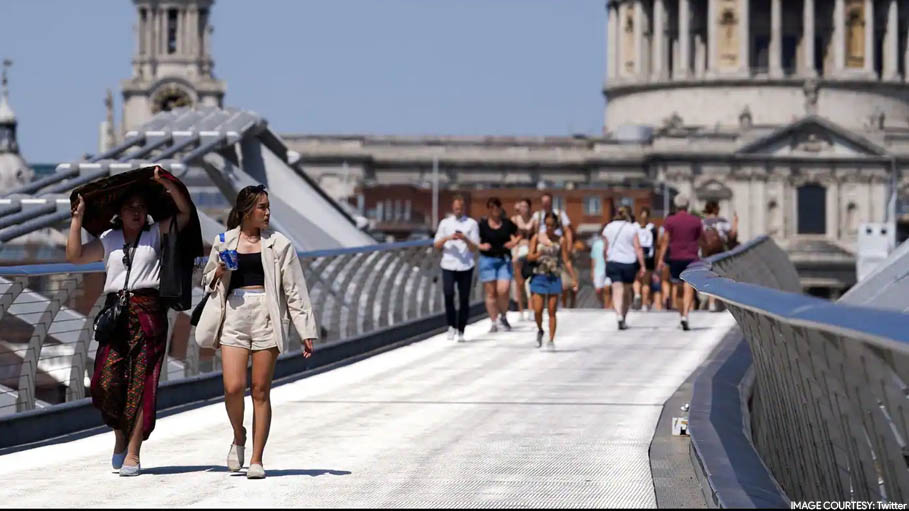 London: Climate change caused by human activity made this month's record-shattering heatwave in Britain at least 10 times more likely to occur, according to research released on Friday.

Overall, at least 34 locations in Britain registered record highs on July 20, when the heatwave peaked over western Europe.

An international team of researchers modelled how likely such an extreme hot weather event would have been before the industrial era began in the mid 19th century.

They then compared this likelihood with that of a heatwave occurring in the current climate -- that is, with the planet nearly 1.2C hotter on average than in pre-industrial times.

They focused on maximum temperatures in Britain's most affected region -- central England and east Wales -- and found that the record-breaking heat was made at least 10 times more likely due to the human-generated greenhouse gases that cause global warming.

The study found that extreme heat events across Europe had increased even more than had been estimated by climate models.

Computer-generated models estimated that greenhouse gas emissions increased temperatures in the July heatwave by 2C. But in actual fact, the heatwave was 4C hotter than it would have been without manmade warming.

"In Europe and other parts of the world we are seeing more and more record-breaking heatwaves causing extreme temperatures that have become hotter faster than in most climate models," said Friederike Otto, senior lecturer in climate science at the Imperial College London's Grantham Institute for Climate Change.

"It's a worrying finding that suggests that if carbon emissions are not rapidly cut, the consequences of climate change on extreme heat in Europe, which already is extremely deadly, could be even worse than we previously thought."

In 2020 scientists at Britain's Met Office calculated that the likelihood of temperatures topping 40C in the natural climate -- that is absent of human-caused warming -- to be roughly one in 1,000 years.

Today that estimate stands at one in 100 years but scientists involved in the study said that observed weather extremes were happening even faster than predicted by models.

"Even with a conservative estimate, we see a large role of climate change in the UK heatwave," said Mariam Zachariah, research associate at the Grantham Institute.

"Under our current climate that has been altered by greenhouse gas emissions, many people are experiencing events during their lifetime that would have been almost impossible otherwise. And the longer we take to reach net zero, the worse the heatwaves will become."

SEE ALSO:
New Research Has Proved That the Study of Genetics Can Change the Physiology

'Extreme Heat Belt' Will Impact over 100 Million Americans by 2053

Alpine Glacier to Disappear by 2100 Claims a New Study