The Year, That Starts with Super Moon

Mark the date; 31st January 2018, the blood moon or blue supermoon is coming in a rare lunar event, which happens only in every 150 years. 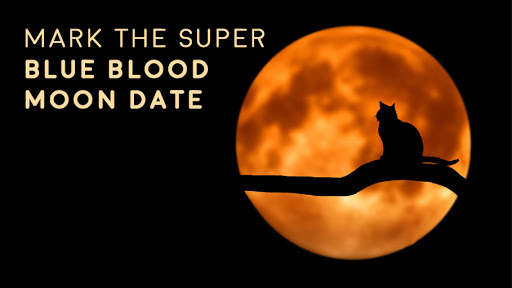 Mark the date; 31st January 2018, the blood moon or blue supermoon is coming in a rare lunar event, which happens only in every 150 years. The New Year supermoon was the second of a trilogy of inspiring supermoons between December and the end of January.

NASA has confirmed that the next “extra special” supermoon will reach its peak on the last night of January – Wednesday, January 31 2018.

Blue Moon is the name given to the second full moon of January, which only happens every two and a half years on average.

NASA said: “With the total eclipse, it’ll be a royal spectacle indeed: a ‘super blue blood’ Moon. “Sometimes the celestial rhythms sync up just right to wow us. Heed your calendar reminders."

The totality of the lunar eclipse will be seen from western North America all the way across the Pacific to Eastern Asia. The eclipsed moon will lose its brightness and take on a fainter-than-normal glow and could appear a menacing red in the night sky.

Sarah Noble, a program Scientist at NASA headquarters, said: “We’re seeing all of the Earth’s sunrises and sunsets at that moment reflected from the surface of the Moon.”

The lunar eclipse will take place when the full moon lines up perfectly with Earth and the Sun such that our planet totally blocks out the sunlight normally reflect off the Moon. Supermoons are usually 14 per cent bigger and 30 per cent brighter than when the moon is at its furthest from Earth.

The eclipse will take place during the middle of the night, and the Pacific Ocean will be turned toward the moon at the time. Central and eastern Asia, Indonesia, New Zealand and most of Australia will get a fine view of this moon show in the evening sky. Heading farther west into western Asia, the Indian subcontinent, the Middle East and Eastern Europe, the eclipse will already be underway as the moon rises.

To the east, Alaska, Hawaii and northwestern Canada will see the eclipse from start to finish. Moonset will intervene for the rest of North and Central America.

The duration of the total phase is 77 minutes, with the moon tracking through the southern part of the Earth's shadow. So, during totality, the moon's lower limb will appear much brighter than the dark upper limb.

So, the upcoming eclipse on Jan. 31 will be the first total eclipse of a Blue Moon in nearly 152 years!

What is a supermoon?

Supermoons happen when a full moon approximately coincides with the moon's perigee, or a point in its orbit at which it is closest to Earth. This makes the moon appear up to 14 percent larger and 30 percent brighter than usual.

While the moon’s average distance is 238,000 miles (382,900 km) from Earth, its orbit isn't perfectly circular, so that distance varies a small amount. The perigee for January's supermoon is the closest of this year.

Supermoons don't happen every month because the moon's orbit changes orientation as the Earth goes around the sun. So, the long axis of the moon's elliptical path around the Earth points in different directions, meaning that a full (or new) moon won't always happen at apogee or perigee.

When to see the supermoon

The first supermoon of 2018 peaks at 9:24 p.m. EST (0224 GMT Tuesday Jan. 2). For observers in New York City, the moon has risen in the east northeastern sky at 4:34 p.m. EST and stay up through the night, setting the morning of Jan. 2 at 7:36 a.m. EST.While the moon is officially full on Jan. 1, it will still appear full to the casual observer the night before and after.

So get ready to witness the spectacular and historic event by being blue or blood, an amazing experience at the start of the year.

SEE ALSO:
2017—A Year of Female Power in the Entertainment Industry