US Suspends Trade Pact with Myanmar after Bloodiest Weekend

The US suspended a trade pact with Myanmar Monday and led international condemnation of the junta's ruthless crackdown, as protesters and mourners took to the streets after the deadliest weekend since the military coup. 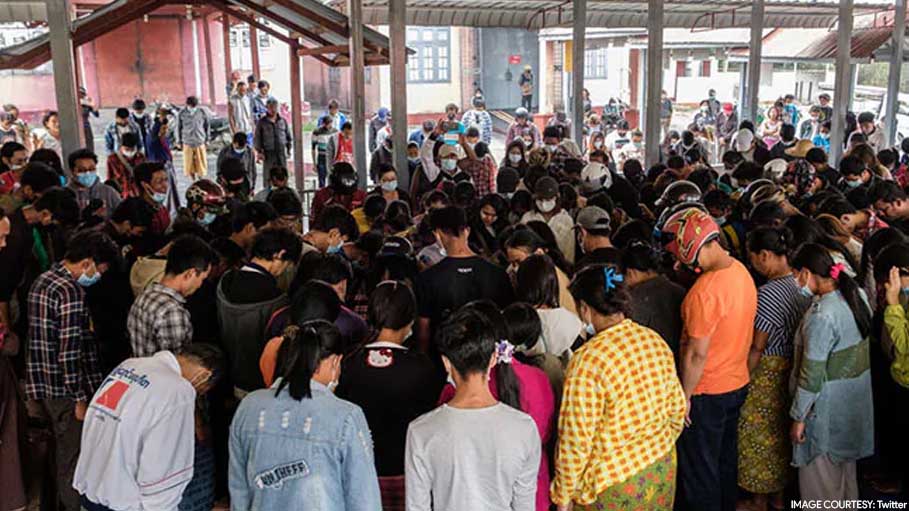 Yangon, Myanmar: The US suspended a trade pact with Myanmar Monday and led international condemnation of the junta's ruthless crackdown, as protesters and mourners took to the streets after the deadliest weekend since the military coup.

Soldiers and police have killed hundreds in a brutal campaign against mass anti-coup protests demanding a restoration of democracy and the release of ousted civilian leader Aung San Suu Kyi.

At least 107 people, including seven children, were killed on Saturday, the United Nations said, as the regime staged a major show of might for Armed Forces Day -- an annual parade showcasing Myanmar's military prowess.

More than 450 people have been killed in the crackdown on protests since the February 1 coup, according to the Assistance Association for Political Prisoners (AAPP) monitoring group, as security forces have used rubber bullets and live rounds to break up demonstrations.

US President Joe Biden's administration announced Monday that the 2013 Trade and Investment Framework Agreement, which laid out ways to boost business but was not a fully-fledged deal, would remain suspended until democracy is restored.

The statement effectively removes Myanmar from the Generalized System of Preferences, in which the United State grants duty-free access to some imports from developing nations if they meet key standards.

Despite the weekend violence, protesters turned out at dawn in towns and cities around the country.

Hundreds paraded through the town of Plate, in Mandalay region, with banners saying: "The people will never be defeated".

As child casualties mount, 60 youngsters in a town in eastern Karen state staged their own protest parade accompanied by their mothers, local media reported.

In Yangon, a one-year-old girl is recovering from surgery after being shot in the eye with a rubber bullet while playing near her house on Saturday, which was also her birthday.

The US suspension of the trade deal came after President Biden condemned the weekend's events as "terrible", while UN rights envoys slammed the "shameful, cowardly, brutal" actions of the security forces.

The UN Security Council will meet Wednesday to discuss the situation, diplomatic sources said, after Britain called for emergency talks.

China added its voice to a chorus of international concern, calling for restraint from all sides.

"Violence and bloody clashes do not meet the interests of any party. The victims are the Myanmar people," Chinese foreign ministry spokesman Zhao Lijian said.

Russia on Monday acknowledged it was developing ties with Myanmar after deputy defence minister Alexander Fomin and other officials joined the weekend parade, but said that did not mean it approved of the "tragic events" unfolding.

"We are very concerned by the growing number of civilian casualties," Kremlin spokesman Dmitry Peskov said.

So far, weeks of repeated pleas for restraint and even international sanctions have not persuaded the generals to ease off.

The brutality continued on Monday in Yangon, with three people killed, including a 20-year-old shot dead, rescue workers told AFP.

One person was also killed in the city of Bago, state media said, adding that a police officer also died in Mandalay after being set alight by protesters.

However, around 2,000 people were pushed back as they approached the Thai border, local media said Monday. A spokesman for the Thai ministry of foreign affairs denied this.

According to Hsa Moo, an ethnic Karen and human rights activist, the weekend airstrikes -- the first in the state in 20 years -- killed four people and left nine injured.

The airstrikes targeted the Karen National Union (KNU), one of the country's largest non-state armed groups.

There are fears that the Myanmar military may launch a major operation against Karen rebels, which could force more people to flee their homes.