An eyewitness named Maya said that she witnessed the police beating and abusing Rakbar inside the vehicle. According to Maya, Rakbar was still alive at that time. 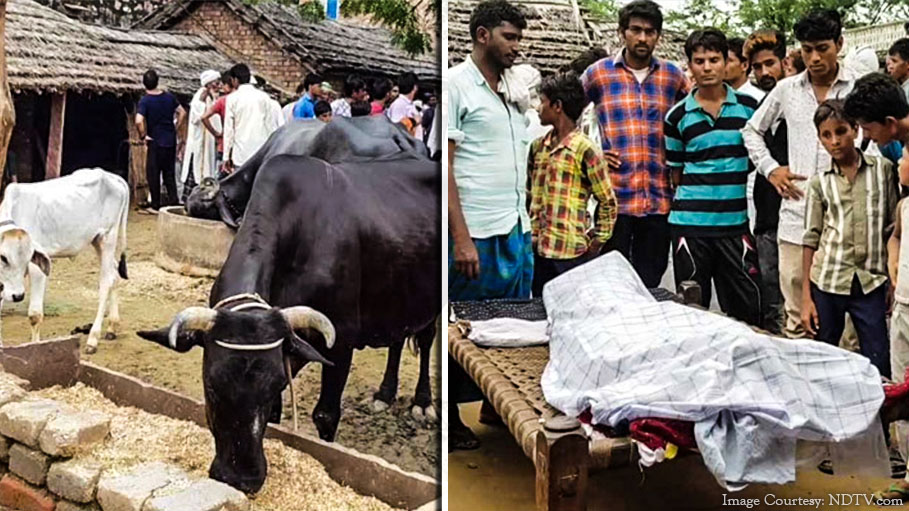 Twenty-eight-year-old Rakbar Khan was reportedly beaten up by a mob in Rajasthan’s Alwar village on suspicion of cattle smuggling. The victim was in police custody for three hours and forty-five minutes before being taken to hospital where the doctors declared him dead.

Rakbar Khan, a resident of Mewat and his friend were reportedly attacked by cow vigilantes in Rajasthan’s Alwar village when they were seen transporting a couple of cows from a nearby village. The two men were walking through a forest when they are targeted and mercilessly beaten by locals in Lallawandi village in Alwar by sticks and stones.

Naval Kishore, a right-wing supporter told NDTV that the police got the call about the incident at 12:41 am, however, they reached the spot at 1:15 am or 1:20 am. When police reached the spot, they found Rakbar lying in the mud. According to Kishore, the police first gave the victim a bath as he was covered all over by mud. Later the police stopped at Mr. Kishore’s house to make arrangements of transport to relocate the cows to a nearby cattle shelter. An eyewitness named Maya said that she witnessed the police beating and abusing Rakbar inside the vehicle. According to Maya, Rakbar was still alive at that time.

While arrangements to transport the cows to a nearby shelter was still being made, the police left the scene to make arrangements for some refreshments. The cops were spotted having tea at a nearby stall while Rakbar Khan was still complaining of pain. Nonetheless, his complaints went unnoticed by the cops. Kishore then headed to the cow shelter while the cops headed to the police station along with Rakbar. It was only around 4 am, the cops took Rakbar Khan to the hospital which was just a kilometer away but he was already dead by the time he reached hospital.

On Saturday, BJP leader Gyandev Ahuja claimed to have spoken to a few locals who told him that Khan was not killed due to lynching but due to the cops’ beating. “Rakbar Khan wasn’t lynched. He was beaten up by the cops to show off. I spoke to the villagers and they told me that he was conscious when they handed him over to the police. The police then beat him up”, he said. Though witnesses like Maya have seen the police beating up Rakbar Khan, police claim that the victim passed away while on the way to the hospital.

Another dairy farmer by the name Pehlu Khan, 55, was killed in a similar manner in April 2017. He was targeted by a mob when he was seen escorting two cows bought at cattle fair. The investigation revolving around Rakbar Khan’s murder is now transferred from the local police station to a senior police officer. Senior police officer Hemant Priyadarshi will also investigate why it took so long for the victim to get medical attention.

“Anything Is Possible With the Right Preparation” Says Supermodel Milind Soman

Study Says People with Early COVID-19 Symptoms are Most Infectious