A recent DNA test reveals that Yetis are nothing but bears! Yeti mystery revealed. 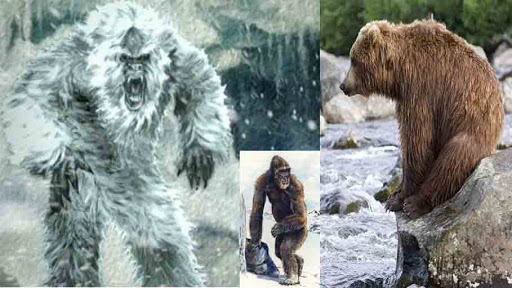 The spine-chilling stories of the abominable snowman or the Yeti, had surely had a cryptic effect on your childhood and teenhood. And, why only teens? Several, adventurous souls and mystery seekers have repeatedly hitted the Himalayan ranges to get a glimpse of the fur covered apeman. Now guess what? A recent research reveals, that the Yeti DNA belongs to the brown bears!

Yeti originates in the folklore of Nepal. It is an ape-like entity, taller than an average human, that is said to inhabit the Himalayan region of Nepal, Bhutan, and Tibet. The names Yeti and Meh-Tehare commonly used by locals of the region, and are part of their history, culture and mythology. It is in the 19th century when the stories of the Yeti first emerged as a facet of western popular culture.

The name "Abominable Snowman" came into existence in 1921, when Lieutenant-Colonel Charles Howard-Bury led the British Mount Everest reconnaissance expedition. This expedition was  chronicled in the book, Mount Everest The Reconnaissance, 1921. The book includes an account of crossing the Lhakpa La at 21,000 ft (6,400 m) where mysterious footprints were found resembling of a bare-footed man.

A couple of hair s⩽ were collected for a genetic analysis in India and Bhutan. This suggested that one small stretch of their mitochondrial DNA is passed down only by females. And this DNA stretch resembled that of polar bears, rather a hybrid between polar bears and brown bears who are possibly the inhabitants of the Himalayas. The news has been confirmed by Charlotte Lindqvist, an evolutionary biologist at the State University of New York in Buffalo.

The scientists sequenced the mitochondrial DNA of 23 Asian bears (including the purported Yetis), and compared this genetic data to that of other bears worldwide. This analysis showed that while Tibetan brown bears share a close common ancestry with their North American and Eurasian kin, Himalayan brown bears belong to a distinct evolutionary lineage that diverged early on from all other brown bears.

Lindqvist mentioned that further genetic research on these rare and elusive animals may help in illuminating the environmental history of the region, as well as bear evolutionary history worldwide. Plus the additional 'Yeti' s⩽ could contribute to this work.