According to Coast Guard Lt. j.g. Phillip VanderWeit the members on the ship had to run to different parts of the ship to escape. They were all rescued between 4 a.m. and 5 a.m. 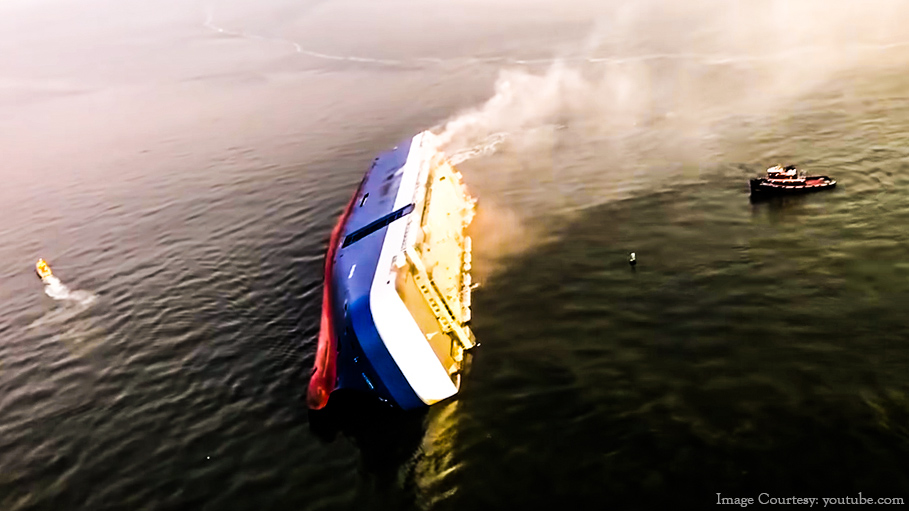 A 656-foot cargo ship called ‘Golden Ray’ overturned in the early hours of Sunday off the coast of Brunswick, Georgia. There were 23 crew members and a pilot aboard the carrier. The ship was en route to Baltimore. The capsized ship was just offshore and could be seen by beachgoers.

It was laid to its side in the evening in St. Simons Sound according to the coast guard to resume rescue operations. The rescue operations were stalled due to a fire that broke out inside the ship said Captain John Reed, commander of the coast guard sector Charleston. There were four people still inside the engine room of the ship at that time and the rescue team is still in search of them. The crew members were mostly Filipinos and South Koreans.

Out of 23 people, 20 people were rescued from the vessel. “As smoke and flames began to appear our crews ... assessed the situation was too risky to further go inside the vessel to attempt to locate the four individuals who remain missing at this time,” Reed said.

According to Coast Guard Lt. j.g. Phillip VanderWeit the members on the ship had to run to different parts of the ship to escape. They were all rescued between 4 a.m. and 5 a.m. He said that some of them were rescued in helicopters while some had to be brought down the vessel and transported to lifeboats by a fire hose. They were given items like socks, games, a bag of hygiene items and Bible.

The ship was carrying vehicles. The rescue team is working towards stabilizing the vessel and post that the rescue operations will resume. The smoke emanating from the ship has ceased however only when the team would enter the ship, it can be fully ascertained if the fire has completely ceased.

Officials are also checking if there is any release of pollutants into the sea and if necessary mitigation responses would be prepared to act. The cause of the accident is still being investigated. The ship’s registered owner is a South Korean company.