Mr Pathole's account is one of only a small handful that the billionaire frequently replies to. 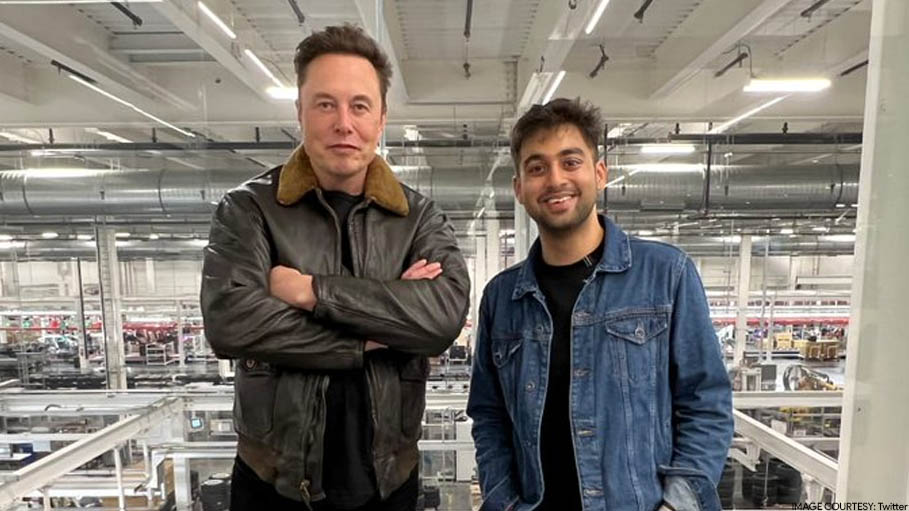 Pune: Not many people can boast of having candid conversations about planetary conquest with Elon Musk, but for Indian software engineer Pranay Pathole, a friendly chat with the world's richest man is just a tweet away.

Their unlikely online friendship has blossomed since Mr Pathole was a teenager, with the mercurial billionaire responding to him over hundreds of tweets and private messages with headline-making company updates and even life advice.

This week, the two finally met face to face, when Mr Pathole travelled to the United States -- his first trip overseas -- to begin a master's degree there in business analytics.

"He is super genuine. Like, way down-to-earth. He's humble," the 23-year-old told AFP beforehand. "The way he takes his time to respond to me... just shows."

Musk is a prolific user of Twitter, often posting more than 30 times a day to his 103 million followers.

But it remains a mystery why the SpaceX and Tesla boss, with a net worth of $266 billion, maintains regular contact with the young Indian.

"To be very honest, I have no idea. I think he must be like, really intrigued by my questions," Mr Pathole told AFP from his parents' upper-middle-class home in Pune.

Mr Pathole's account is one of only a small handful that the billionaire frequently replies to -- an average of once every two days, based on Musk's public Twitter posts since the start of 2020.

The first time Musk responded to him was in 2018 when Mr Pathole, then aged 19, pointed out a flaw in Tesla's automatic windshield wipers.

"Fixed in next release," Musk replied, with Tesla addressing the issue in a subsequent software update.

His mother and father celebrated by taking him out to dinner that night.

"I was blown away, to be very honest," Mr Pathole says. "I took multiple screenshots of it and just never wanted the day to end."

Their later private chats -- daily at first -- covered "busting myths" about Musk's past and discussions about why colonising other planets is "essential", Mr Pathole says.

"I used to ask him dumb questions, silly questions. And he used to take his time to reply to me."

The time difference between the US and India has done little to hamper the four-year virtual friendship.

"I don't think he sleeps that often. Because he's on Twitter, like, the majority of the time," Pathole says.

Mr Pathole says interactions with Musk have become "much more casual" over the years, and he no longer rushes to share them with friends and family.

"Elon is the same guy in his public persona as well as in his private," he says.

The billionaire investor is also locked in a high-stakes legal battle with Twitter itself over his effort to walk away from an agreement to buy the company, with the trial set to begin in October.

But Mr Pathole rejects suggestions that the billionaire acts with malice.

Recruited straight out of engineering college to work at Tata Consultancy Services, India's biggest IT firm, Mr Pathole says he was "infamous" for getting into trouble at school -- a trait he says helps him better understand Musk.

Having travelled to the US last week -- bearing sweets for Musk -- he hopes to not only earn his degree at the University of Texas at Dallas but gain work experience at a US company, including any of Musk's.

"I want to get a job at Tesla on my own merit. It's not like I want any favours. It would be good if he could interview me," MrPathole says.

After their meeting, Mr Pathole tweeted a picture of the pair, which Musk "liked".

'Live on Earth, die on Mars'

Dressed in a black T-shirt in the style of his idol, Mr Pathole can explain the intricacies of reusable rocket boosters and make a philosophical case for space exploration with equal ease.

"Live on Earth and die on Mars: that is a philosophy that we all share," Mr Pathole says, adding that he wants to grow old and die with the "red dust of Mars" on his feet.

Mr Pathole has amassed a six-digit Twitter following, adding more every time Musk mentions him in a tweet.

Even offline, Musk is a frequent topic of dinner-table conversation with Mr Pathole's family and friends.

"Elon is like our family friend," jokes Pranay's father Prashant, a media consultant, adding that he and his wife Pallavi, a homemaker, were proud of their son's passion.

"If he follows Elon Musk, if he wants to settle down on Mars, we don't mind."

SEE ALSO:
Here’s Why Anushka and Kohli Will Cherish Their Bhutan Trip Forever