‘TIME’ Changes Its Cover from ‘Modi: Divider in Chief’ to ‘Modi Has United India’

The Prime Minister and his council of ministers are taking oath today thereby forming a new cabinet of the new government for the next 5 years. 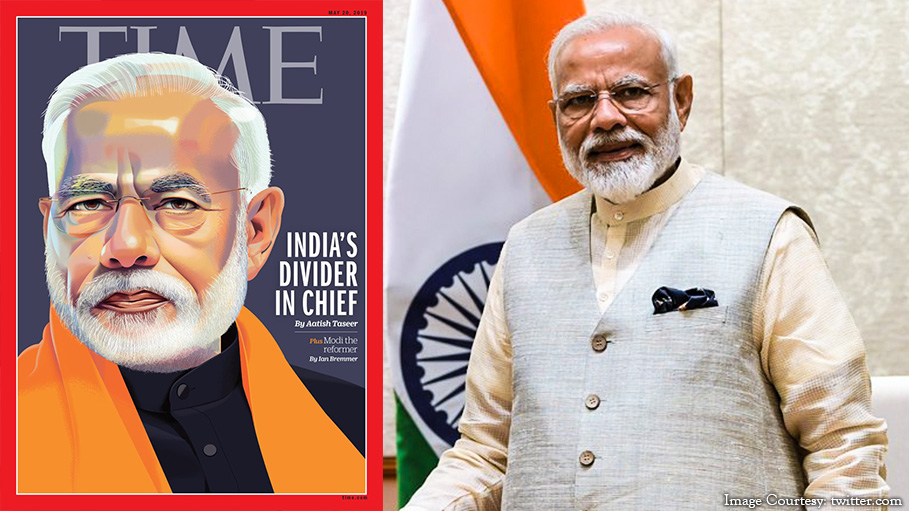 A week after the TIME magazine’s controversial cover story which labeled the Prime Minister of India, Narendra Modi as “divider-in-chief”, TIME magazine, after the BJP’s massive historic win and return to power, has now come with a new headline, “Modi Has United India Like No Prime Minister in Decades”.

TIME Magazine in its latest article, asks how a “supposedly divisive figure not only managed to keep power, but increase his levels of support?” At the same time the writer of the article, Manoj Ladwa, also describes Prime Minister Narendra Modi’s second term as “a victory for meritocracy, and for opportunity, thanks to a slate of welfare policies for the country’s extreme poor”.

The article highlights the emergence of the Prime Minister from one of India’s most disadvantaged social groups is inspirational. The article also describes the demonetisation of 2016 as a short-term pain, which is done with a vision for long-term gain. Modi’s initiative of digitization has empowered the poor increased tax revenue and has connected the poor with programmes such as Jan Dhan Yojana.

Manoj Ladwa, who is the CEO of a Britain based media organisation India Inc. also writes, “Through socially progressive policies, he has brought many Indians, both Hindus and religious minorities, out of poverty at a faster rate than in any previous generation”.

In the previous article, writer Aatish Taseer had criticised the Modi government as one in which “minorities of every stripe-from liberals and lower castes to Muslims and Christians-have come under assault” and which has lead “India down the road to a profound anti-intellectualism”.

The article was used by opposition parties for attacking Prime Minister Modi and the BJP during the election campaign. While BJP had termed the TIME article is an attempt to malign Prime Minister Modi’s image and had accused the writer Aatish Taseer, who is the son of journalist Tavleen Singh and Pakistani politician and businessman Salmaan Taseer, of pursuing Pakistan’s agenda.

Prime Minister Modi himself said during a campaign rally, “Time magazine is foreign, the writer has also said he comes from a Pakistani political family. That is enough for his credibility”.

The Prime Minister and his council of ministers are taking oath today thereby forming a new cabinet of the new government for the next 5 years. Prime Minister Narendra Modi in his speech to his party and the NDA, described the agenda for the new government will be ‘Sabka Saath, Sabka Vikas, Sabka Vishwas’ and also called on NDA leaders to earn the trust of minority communities in India.

SEE ALSO:
No Change in Timing of Night Games in IPL 2020 Clarifies Ganguly

Why IoT is a Game Changer for Businesses of All Types