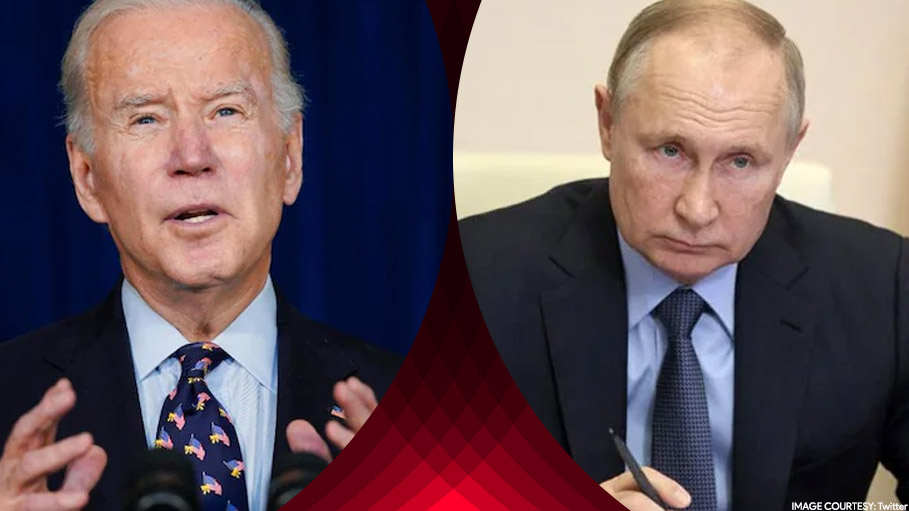 This comes after President Vladimir Putin recognized the independence of breakaway regions Donetsk and Luhansk and ordered Russian troops there.

Speaking on the Russia-Ukraine crisis from the White House, Biden also called Putin's moves the "beginning of a Russian invasion" of Ukraine as he announces new sanctions against Moscow.

"We are implementing full blocking sanctions on two large Russian financial institutions: VEB and their military bank," Biden said adding, "We are implementing comprehensive sanctions on Russia's sovereign debt. That means we have cut off Russia's government from Western financing. It can no longer raise money from the West and can not trade in its new debt on our markets or European markets either."

"Who in the Lord's name does Putin think gives him the right to declare new so-called countries on territory that belongs to his neighbours?" Biden asserted from the White House podium.

In his remarks, Biden, further said, "We will also impose sanctions on Russia's elites and their family members. They share in the corrupt gains of the Kremlin policies and should share in the pain as well," adding, "We have worked with Germany to ensure that Nord Stream 2 will not ... move forward."

Following Putin's announcement, Biden on Monday signed an Executive Order that will prohibit all new investment, trade, and financing by U.S. persons to, from, or in the "so-called Donetsk and Luhansk People's Republics".

The US strongly condemned Putin's decision to recognize the "so-called Donetsk and Luhansk People's Republics" as "independent."

US Ambassador to UN Linda Thomas-Greenfield supported Ukraine's call for an Urgent Meeting of the UN Security Council. She criticized Russia's announcement and said that it is "nothing more than theatre, apparently designed to create a pretext for a further invasion of Ukraine."

Notably, Putin has also ordered the sending of the Russian Armed Forces to Ukraine's breakaway regions after recognizing their independence in his Monday address to the nation.

Notably, in March 2014, Russia invaded and then annexed the Ukrainian peninsula of Crimea. In April pro-Russian separatists in the Donbas region declared independence. The war continued in the eastern Ukrainian region and then spread westwards. Roughly 13,000 Ukrainian soldiers and civilians eventually died in the conflict.

In April 2019, Volodymyr Zelensky, a former comedian, was elected by a large majority as President of Ukraine on a promise to restore Donbas to the country. The crisis deepened in January 2021, when Zelensky appealed the US President Biden to let Ukraine enter NATO. In the spring of 2021, Russia started massing troops near Ukraine's borders in what it said were training exercises.

Russia stated that its troop deployment is in response to NATO's steady eastward expansion. It argued that its moves are aimed at protecting its own security considerations.