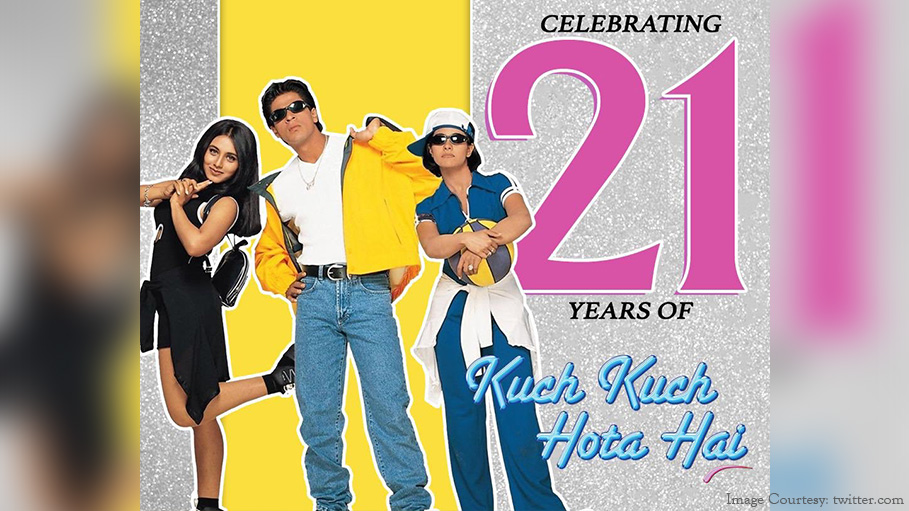 Karan Johar, who stepped into the industry as an assistant director to Aditya Chopra’s ‘Dilwale Dulhania Le Jayenge’, made his directorial debut with ‘Kuch Kuch Hota Hai’. KJo made sure to raise a toast to this occasion by putting up a tweet with its much-loved poster:

Firsts are always special! The cast, crew, music & the heart & soul of this film was all in the right place❤️ Thank you for making this journey a timeless one even after 21yrs! #21YearsOfClassicKKHH @iamsrk @itsKajolD #RaniMukerji @BeingSalmanKhan @apoorvamehta18 @DharmaMovies pic.twitter.com/p8OpdLX8AD

Released in 1998, the film turned out to be a blockbuster, and till date is considered as a cult Bollywood romantic drama starring the three most favourite actors of Indian cinema.

Shahrukh Khan as Rahul, a popular college heartthrob, is best friends with tomboyish Anjali, played by Kajol. However, the sweet and sour chemistry between the two is intervened as the gracious Tina, donned by Rani Mukerji enters college in the middle of the year. Love sprouts between Rahul and Tina, while Anjali feels not only left out but acknowledges her earnest love towards Rahul. She decides to move apart with a heavy heart and Rahul and Tina get married. But, destiny had a surprisingly different plan for the three college buds. Tina passes away while giving birth to their child, and she is named after their long lost friend, Anjali. Young Anjali, while growing up, goes on to fulfill the last wish of her dead mother. Reuniting, Rahul and his bestie Anjali, for Tina didn’t fail to acknowledge somewhere beneath their spirited friendship, lies a strong bond of love.

Despite being a 90s film, the trio plot has been reincurred in more than one recent high school dramas like ‘Student of the Year’ (2012) and more.

And if you are a 90s kind, chances are this article can get you carried away in nostalgia. Well, eager to know how you feel about this, while you’re humming its tunes…!

SEE ALSO:
Facebook to Save 64 Million Litres of Water Per Year, Claims Its New Building - MPK 21

Google Turns 21 with This Cute Doodle, Can You Find the Date of Birth Hiding Here?