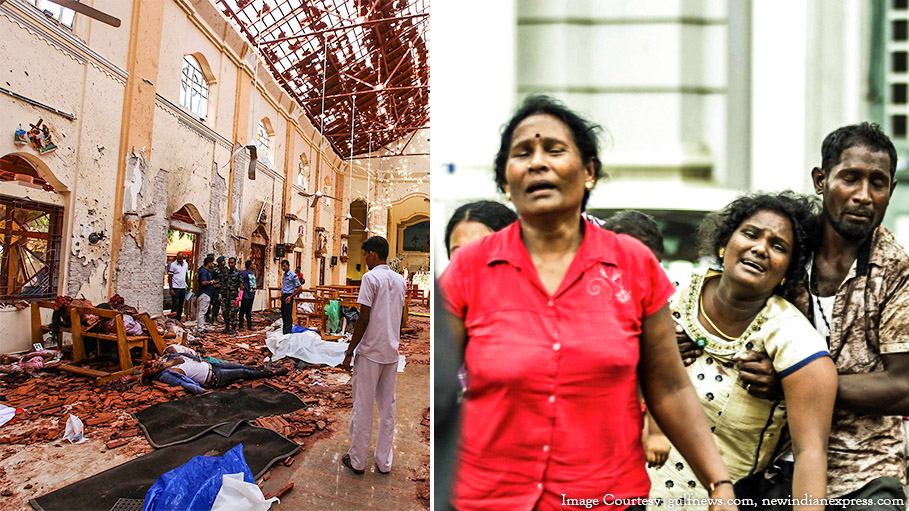 Amidst the serials blasts that rocked the island country of Sri Lanka, 5 Indians lost their lives. The blasts tore down three churches, four luxury hotels and a housing complex. In a tweet, Foreign Minister Sushma Swaraj said that the Indian High Commission in Colombo conveyed that the National Hospital has informed them about the death of Indian Nationals by the names of Lakshmi, Narayan Chandrashekhar, Ramesh, K G Hanumantharayappa and M Rangappa. The name of P S Rasina was given out by Kerala Chief Minister Pinarayi however the Indian Commission hasn’t confirmed this name so far.

K G Hanumantharayappa and M Rangappa are said to be members of the 7-member- team of JDS workers from Bengaluru, Karnataka who were touring Colombo. Indian authorities are in touch with Lankan counterpart Tilak Marapana and the Indian High Commission to get further details on the situation. Condemning the attacks PM Narendra Modi said, “Strongly condemn the horrific blasts in Sri Lanka. There is no place for such barbarism in our region. India stands in solidarity with the people of Sri Lanka. My thoughts are with the bereaved families and prayers with the injured.”

The destructive bomb blasts killed a total of 290 people and left over 500 people injured in Sri Lanka on Easter Sunday. Numerous tourists from countries like the UK, US, Japan and the Netherlands are confirmed dead. As per reports, three Britishers, two Turkish citizens, two Australians are confirmed dead. There are 25 unidentified bodies and are believed to be foreigners.

The Sri Lankan government had earlier ordered a curfew which was lifted at 6 am this morning. So far, 24 people have been arrested in connection to the bomb blasts. A Muslim driver that drove a van that carried explosives for the bomb attacks was arrested. A house has also been discovered in the suburb of Panadura, south of Colombo where the bombers lived for the past three months.

According to Sri Lankan spokesman, Rajitha Senaratne, they were warned about the terrorist attacks. Authorities believe that the attack has been carried out by an international network. Rajitha Senaratne also said that the victims’ families will receive compensation and the funeral expenses will be taken care of by the government. The churches that have been destroyed will be repaired by government funds.  World leaders such as Narendra Modi, Theresa May, Donald Trump, Imran Khan, Jacinda Ardern, Jean Claude Juncker and Vladimir Putin have condemned the savage attacks that are considered to be one of the most brutal attacks to have shaken the Island country in decades.