A Lake of Water in Mars

"This kind of environment is not exactly your ideal vacation, or a place where fish would swim. But there are terrestrial organisms that can survive and thrive, in fact, in similar environments." 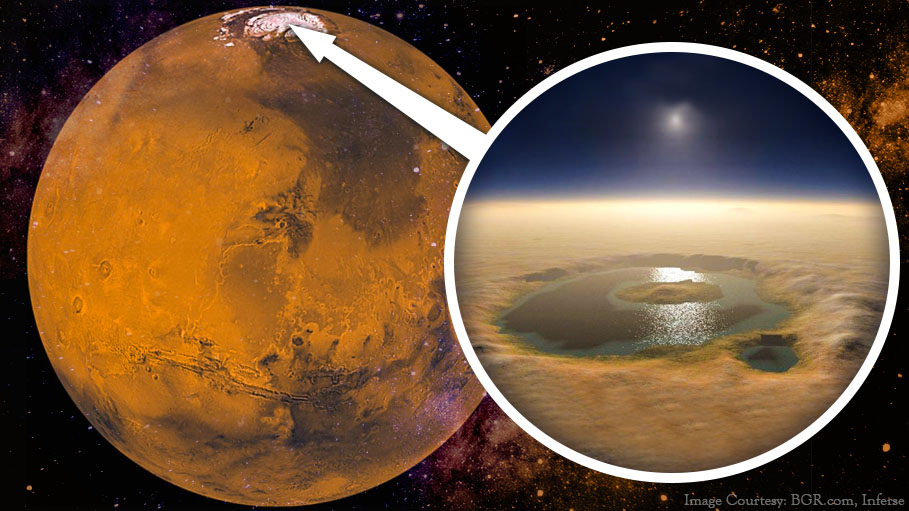 Scientists exploring the possibilities of life on Mars for years have spotted a lake on the south polar plain of the planet. A body of water means a possibility of life, which also establishes the fact that there must be a habitat, at least some microbial life on Mars.

The size of the salt-laden lake is said to be roughly 12 miles or 20 kilometers in diameter, which is of a shape of a rounded triangle and located more than a kilometer below the ice surface. This is the first stable body of water ever found on Mars also known as Red Planet.

Science has long been exploring, whether life is possible anywhere other than the earth and as water is an essential ingredient of life, the new discovery will now throw some light on the exploration of life outside earth too.

Scientists though are of the view that it would take some years to exactly verify the authenticity of the water body, which appeared like a subglacial lake. Now the main task is to extract the sample of water from the lake below the ice.

Planetary scientist Roberto Orosei, Istituto Nazionale di Astrofisica of Italy, said “This is the place on Mars where you have something that most resembles a habitat, a place where life could subsist. This kind of environment is not exactly your ideal vacation, or a place where fish would swim. But there are terrestrial organisms that can survive and thrive, in fact, in similar environments. There are micro-organisms on Earth that are capable of surviving even in ice”. Orosei has also led the research, which is published recently in the journal Science.

The lake is said to be detected, while researching using data, which are collected between the period of May 2012 and December 2015 through an instrument aboard the European Space Agency Mars Express spacecraft, that also transmits radar pulses and which can penetrate the surface of the mars and ice caps.

Co-author of the study Enrico Flamini, who is also the Chief Scientist at the Italian Space Agency during the research, said, “This took us long years of data analysis and struggles to find a good method to be sure that what we were observing was unambiguously liquid water”.

Evidence also suggests that about 4.3 billion years ago, Mars was a watery world like Earth, with ocean covering half the planet. As dry lake beds and river valleys are evident on the surface of the Mars. But the planet eventually lost its magnetic field, which stripped it of its atmosphere and liquid water.

In the year 2015, some scientists using, NASA's Mars Reconnaissance Orbiter (MRO) has also claimed to have detected flowing water on the planet after they had spotted recurring slope lineae or seasonal dark streaks on the Mar’s surface. Since then the debate continued, whether the streaks are a result of water or sand. So, in this new discovery too, we must wait until a clear lake comes to the surface.