The young boy first ran towards the podium but instead of heading towards the Pope, the little boy was more fascinated by someone else. 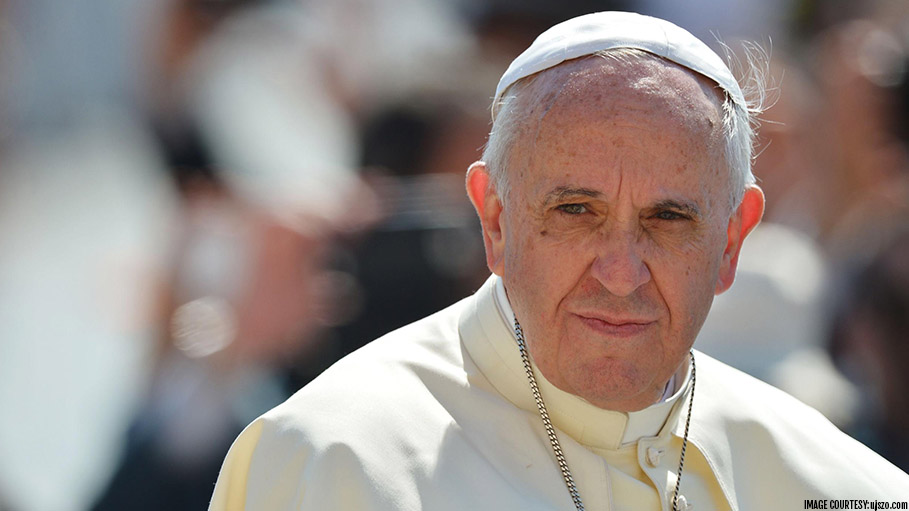 Pope Francis was part of a meet in Vatican City where clericals were giving a catechism session in various languages. Hundreds of pilgrims had come from far and near for this session. The most delightful part of the session, however, was when a young six-year-old boy escaped from the grasp of his parents and oblivious to his surroundings ran onto the podium where Pope Francis and the archbishop were seated, flanked by a Swiss guardsman.

The young boy first ran towards the podium but instead of heading towards the Pope, the little boy was more fascinated by someone else. It was none other than the smart and unyielding Swiss guardsman who was standing and guarding the most ‘guarded man of the earth’. The boy whose name was Wenzel Wirth then played with his gloved hands and pulled the fringes of his blue and yellow striped uniform. Wenzel glanced at him while the guardsman stood like a statue without moving an inch and continued his duty of guarding. The boy completely ignored the other prominent personalities seated right beside him. The audience obviously was taken up the child’s sweet gesture and they didn’t miss the opportunity to give him a loud applaud.

The person who was most impressed by all of this was the pope himself. The pope smiled and laughed and was quite taken up by the small boy’s acts. It was not long before Wenzel’s mother came up and pulled the child away. According to Reuters, the mother explained to Pope Francis that her son is mute after which the Pope requested the staff to allow him to play. She added that they had something in common; that is the same bloodline from the South American Country Argentina. "He is Argentine. Undisciplined," Francis joked to Archbishop Georg Ganswein, seated to his right.

Father of Wenzel also explained to the pope that his son has some behavioral problems and a problem with his speech. "We try to let him be free. He has to express himself, and we live without hiding his problems," said the father.

The boy’s actions did send a message to the pope who announced in Spanish to the audience, "This child cannot speak. He is mute. But he can communicate, and he has something that got me thinking: He is free. Unruly . . . but he is free."

Before signing off the pope left the audience with a provoking thought when he said, "When Jesus says we have to be like children, it means we need to have the freedom that a child has before his father, I think this child preaches to all of us."