All 22 Bodies Recovered after Plane Crash in Nepal

Nepal Plane Crash: Operated by Tara Air- a domestic air service provider, the turboprop aircraft en route to Jomsom from Pokhara crashed at an elevation of 14, 500 feet at the base of Manapathi peak in Mustang District on Sunday. 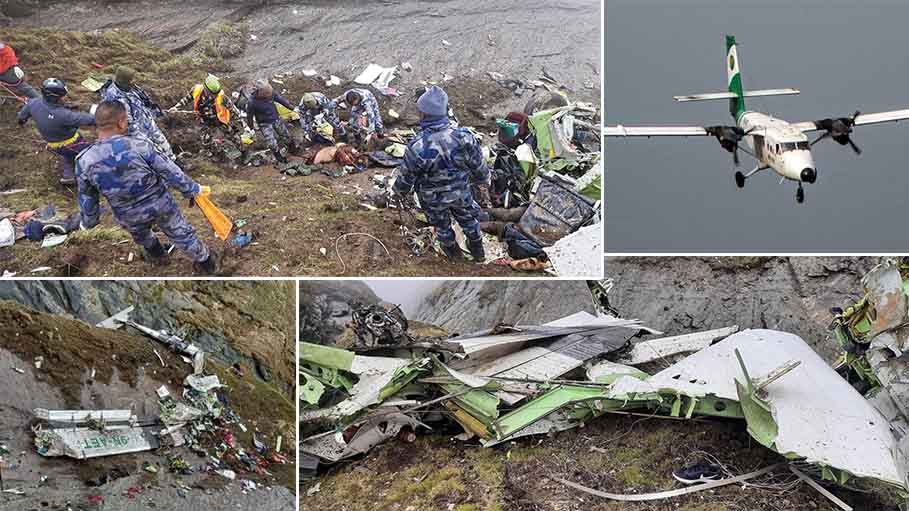 Kathmandu: All 22 bodies have been recovered from the incident site in the Tara airplane crash that took place in the Mustang district of Nepal on Sunday morning.

According to the rescuers, the black box has also been retrieved and is bringing it to the base station.

Earlier, on Monday, out of 21 recovered dead bodies, the Nepali Army took 10 bodies to the base station.

"Till now we have recovered 21 dead bodies. 10 bodies are carried back to the base station with the help of a Mi-17 helicopter in Khabang," said Teknath Situala, the Spokesperson at Tribhuwan International Airport in Kathmandu who has been overseeing the rescue and search operation told ANI.

"Because of bad weather conditions rescue operation was very difficult, even with 50-60 rescuers has been deployed. Three helicopters are also stationed which have been engaged in retrieving the bodies located by the rescuers from the accident site to the nearby base station," he added further.

Operated by Tara Air- a domestic air service provider, the turboprop aircraft en route to Jomsom from Pokhara crashed at an elevation of 14, 500 feet at the base of Manapathi peak in Mustang District on Sunday.

Search operation for the missing body is continuing in the Himalayas which as per the officials are engulfed by a thick blanket of fog reducing the visibility.

"The site of the accident is located at 14,500 feet, making the terrain extremely sloppy. The constant rain and clouds have created difficulties for the rescuers. Despite that, they are doing their very best to retrieve the dead bodies and ferry them to the base station and back to Kathmandu," an airport official added.

The twin-otter aircraft, which took off from Pokhara for Jomsom in Mustang at 9:55 am (NST) on Sunday, lost contact shortly after takeoff and was later found at Sansure Cliff of Thasang Rural Municipality-2 in Mustang on Monday morning. A total of 22 passengers, including four Indians, two Germans, and three crew members, were on board the plane.

Soon after the incident, the Ministry of Culture, Tourism and Civil Aviation of the Himalayan Nation issued a press statement on Monday regarding the formation of a five-member panel to probe into the tragic crash. stating that Senior Aeronautical Engineer Ratish Chandra Lal Suman would lead the team.

A preliminary investigation made by the Civil Aviation Authority of Nepal (CAAN) has shown that the crash might have occurred due to bad weather conditions.

CAAN Director General Pradeep Adhikari told a meeting of the International Committee of the Parliament on Monday that the Tara Air plane met with the accident because of inclement weather.

"Preliminary investigation showed that the aircraft which should have made a right turn instead took a left turn due to the bad weather and crashed," he said further.

Meanwhile, Prime Minister Sher Bahadur Deuba extended his heartfelt tributes to the deceased and expressed condolences to the bereaved families via Twitter.

Mustang is one of the mountainous and fifth-largest districts of the Himalayan nation which hosts the pilgrimage of Muktinath Temple. The district, also known as "Land beyond the Himalayas", is located in the Kali Gandaki valley of the Himalayan region of Western Nepal.