Of the 27 people that were charred to death in the fire on May 13, police said 22 bodies have already been handed over to their families. 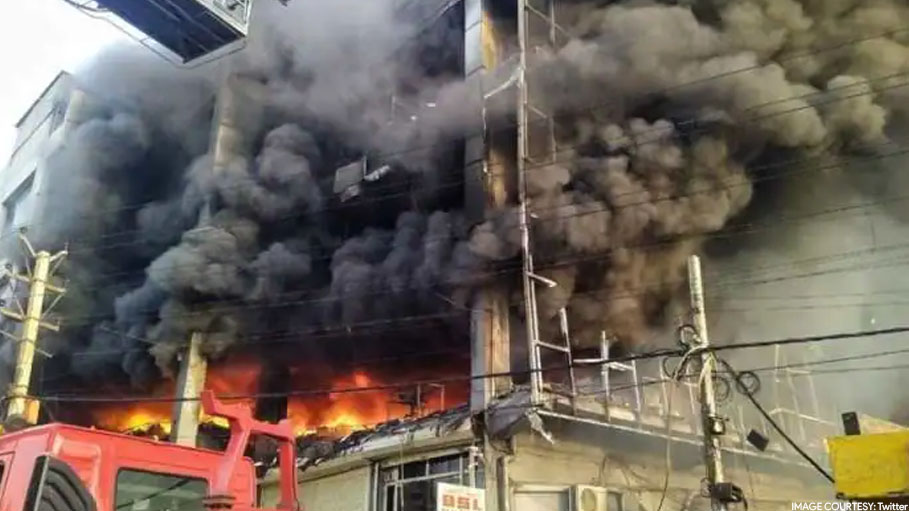 New Delhi: Over a month after 27 people were killed in a massive blaze that ripped through a building in Mundka in Delhi, police on Thursday said a victim's body was handed over to another family "by mistake".

According to the police, the body of one Sweety was mistakenly identified as Ranju Devi by her husband, as both had similar characteristics.

Of the 27 people that were charred to death in the fire on May 13, police said 22 bodies have already been handed over to their families.

"On Wednesday, four DNA profiles were received, which we will hand over to the families concerned," a senior police officer said, adding there are five bodies at the Sanjay Gandhi Hospital -- Ranju Devi, Soni Kumari, Monika, Parveen and Geeta Devi.

"On May 14 (the next day of the incident), eight bodies were identified by their family members and they were handed over. The FSL reports of seven were correctly matched with the samples of the family members. However, that of Ranju Devi did not match.

"On Wednesday, the FSL reports were received and it came to the fore that of the five bodies one was of Ranju Devi," Deputy Commissioner of Police (outer) Sameer Sharma said.

Earlier, PTI had reported that Ranju Devi's husband Santosh Kumar had "identified" her body by her turtle-shaped ring and two bangles -- the items that remained intact on her charred body.

"I identified her by her ring and bangles -- one red and the other white. I received her body from the hospital and did all the rituals," he had said.

Delhi Chief Minister Arvind Kejriwal had announced a compensation of ₹ 10 lakh for the families of the deceased and ₹ 50,000 for the injured.

Speaking to PTI, Santosh said that he received a call on Wednesday around 7 pm from police, following which he went to the Mundka police station.

"When I reached there, Sweety's family members were also present. The police told us that the body was mistakenly identified and no one was at fault. I was told that Ranju's body was identified by forensic examination and it was still at the hospital.

"After the fire, I was emotional and identified that body as my wife. When I reached Sanjay Gandhi hospital on Thursday, Sweety's family members alleged that I had earlier identified the body as that of my wife to get the compensation of ₹ 10 lakh," Santosh said.

He claimed that he had to borrow money to cremate his wife.

"I am a mason and since the incident has happened, I could not go to work. I received the body of my wife today around 1 pm and cremated it after borrowing money.

"I was also assaulted by the family members of Sweety in the hospital and they slapped me at least four to five times. Her family members were asking me to bring back her body," he said.

According to the police, the body of one Geeta Devi continues to be in the hospital as her parents have passed away and she does not have a child.

Further, the FSL has been unable to find satisfactory results from the blood samples collected from her "siblings".