The Amazon Rainforest has been burning since a considerable amount of time and that too at a record rate. Here’s how the Twitterati express their concern. 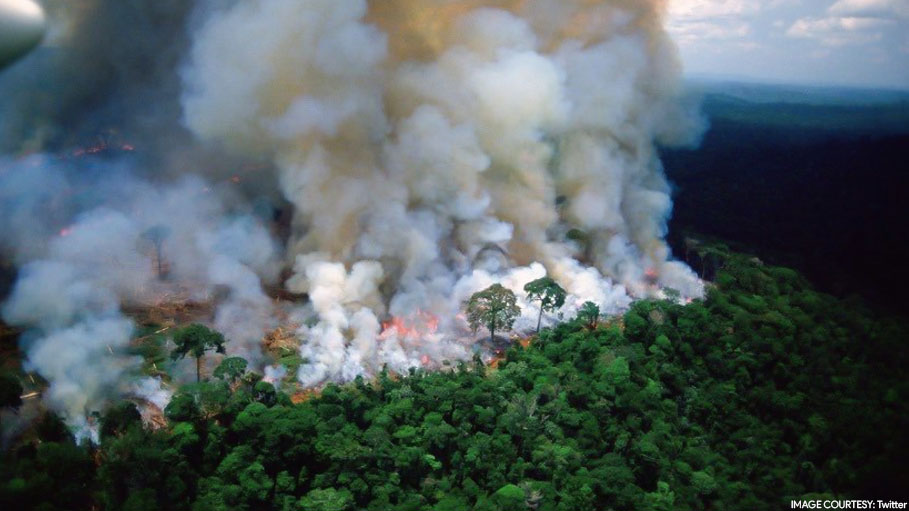 Often referred as the planet's lungs, the Amazon Rainforest contributes to 20% of the whole world’s oxygen!

According to Brazil’s space research centre, Instituto Nacional de Pesquisas Espaciais (INPE), the Amazon recorded 72,843 fires in the Amazon in 2019. And compared to 2018, these wildfires marked 83% surge this year, which is of course, alarming.

Although it’s quite difficult to spot the exact date or time of this fire, as the forest has been ablaze numerous times, however, it’s since last Thursday that the inferno took this ghastly form.

And this is how Twitterati react to this environmental disaster, including celebs from every sphere:

The 'lungs of our planet' are burning! The #AmazonRainforest is home to about 3 Mn species of plants & animals and 1 Mn indigenous people. It plays an important role in keeping the planet's carbon dioxide levels in check. We won't exist without it! #SaveTheAmazon #PrayforAmazonas https://t.co/9rKfTYXolL

The Amazon may be burning in Brazil but the consequences affect all of us. President Bolsonaro’s shameful lack of action means the world must step in. Urge your leaders to stand up for the planet and force action to save the precious resource that is The Amazon pic.twitter.com/CaC5nzFN1W

Actress Anushka Sharma in her Instagram story, uploaded a picture of smoke puffed Amazon forest adding, “The Amazon rainforest has been burning for weeks and we are only just finding out about this!! This is such a scary news! Amazon forests are the lungs of this already suffering planet and they are on fire now! I wish this got more importance from world media!! #saveamazon,”.

Another onscreen diva Disha Patani shared Leonardo DiCaprio’s Insta post and wrote, “Terrifying to think that that the Amazon is the largest forest on the planet creating 20% of the earth’s oxygen, basically the lungs of the world, has been on fire and burning for the last 16 days running, with literally NO media coverage whatsoever! Why?”