Barack Obama is a well-known basketball fan and was often seen playing the game with the presidential staffs, celebrities and other guests, at the White House during his tenure as the President of United States. 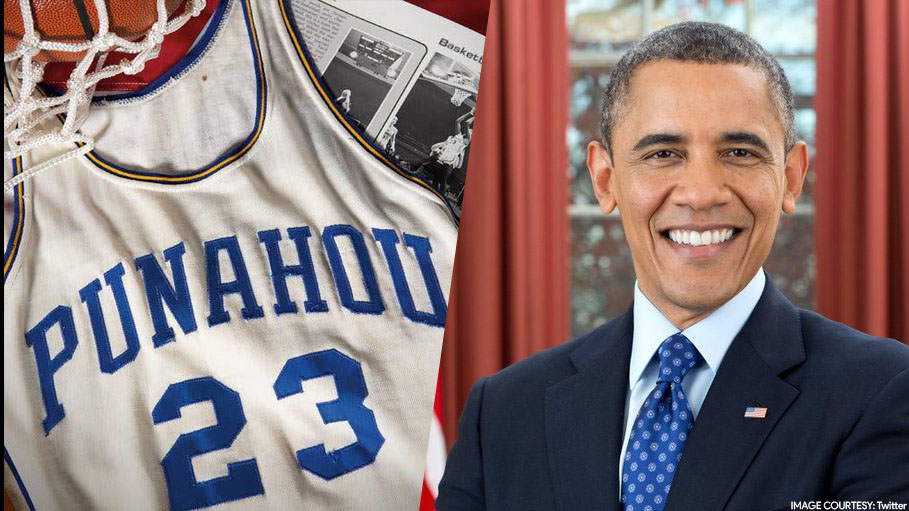 A basketball jersey, which was once worn by former US President Barack Obama, sold for $120,000. The number 23 jersey was one of the prized possessions of Barack Obama when he was an 18-year-old boy, while he was a senior at Punahou high school in Hawaii, where he lived at the time, according to the Dallas auction house, Heritage Auctions.

Barack Obama is a well-known basketball fan and was often seen playing the game with the presidential staffs, celebrities and other guests, at the White House during his tenure as the President of United States.

The jersey was earlier valued at $100,000 was sold for a stunning $120,000 earlier this week during Heritage Auctions’ Sports Platinum Night Memorabilia Auction. At the same time, it was the most popular item of the $11 million auction, which has even surpassed the sale price of the only known Babe Ruth and Ty Cobb dual signed photograph, which was sold for $111,000.

Though the top lot in the auction was a 1937 Lou Gehrig worn New York Yankees jersey with photo matches to two different home run games, which was sold for an estimate worth $2,580,000.

During the auction process, all eyes were on Obama’s jersey, the No. 23 jersey that was issued by Hawaii’s Punahou School during its annual 1978-1979 sports meet and was worn by “Barry” Obama as a member of the senior team in 1979 Hawaii State Champion boys’ varsity basketball team at Punahou, Hawaii.

The jersey was rescued by luck from being discarded when the new varsity jerseys arrived on the campus after freshmen Peter Noble, who was three years junior to Obama at Punahou, had worn the same number “23” jersey while he was the member of the junior varsity team.

Along with the jersey, the auction also rescued Noble’s yearbook from Obama’s senior year. The book features a quarter-page personal layout with a section dedicated to the senior graduating class, including the playground shot of the future US President, which Noble has labeled, “We go play hoop”. On page number 104 of the yearbook, there is a photo of Obama wearing the jersey with a caption, “Barry Obama goes up for a basket against St. Louis”.

It is also a matter of coincidence that Obama’s jersey number 23 were worn by the two men, who are most popularly known as the greatest basketball players of all time, Michael Jordan and LeBron James.

Heritage Auctions is the largest fine art and collectibles auction house founded in the year 1976 in Dallas, United States and in the course of time, they have grown into the world’s largest collectibles auctioneers. Heritage has its headquarters in Dallas and its offices in New York, San Francisco, Beverly Hills, Chicago, Palm Beach, Paris, London, Amsterdam, Geneva and Hong Kong.

Heritage Auctions is also one of the most popular auction-house website, HA.com on the internet, with over one million registered bidder-members and searchable free archives of four million past auction records with prices, descriptions and enlargeable photos. The reproduction rights are routinely granted to the media for photo credit.

"My Fascination with India Had to Do with Gandhi": Barack Obama in His Book