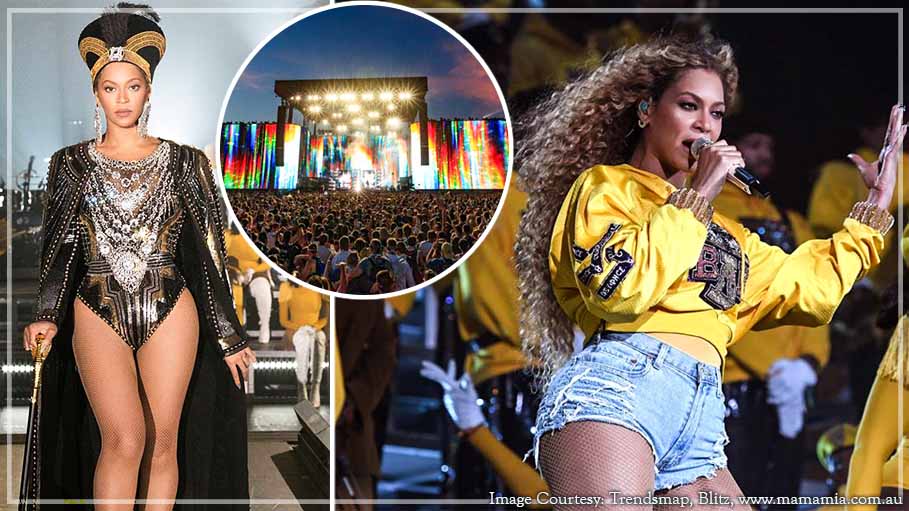 "Coachella, thank you for allowing me to be the first black woman to headline," Beyoncé said, before singing "Run the World (Girls)." Beyoncé pulled off the greatest phenomena in just two hours and left the audience wanting for more. The audience themselves could not believe they were given such a spectacular show that encompassed everything from quotes to homages to reunions.

Eminem and The Weeknd were the other headliners. However,  Beyoncé entertained the audience with many surprises up her sleeve. The musical extravaganza was too much for the audience to digest. They were stunned, to say the least by her performance. Her fans have rechristened her as Beychella.

Beyoncé began her show dressed in an Egyptian inspired outfit looking all royal and marched along with the music by the HBCU marching band. Beyoncé became the first colored person to headline the music festival and she seized the opportunity to represent and incorporate what she stood for. She incorporated the black college tradition, paid homage to Nina Simone, Fela Kuti and DJ Screw, she sang the Black National Anthem  ‘Lift Every Voice and Sing’. She also incorporated songs by Juvenile, C-Murder, Master P, Pastor Troy, Fast Life Yungstaz and Crucial Conflict. She did not stop there, she also did Go-Go and second line brass band versions of her songs. She opened her performance by singing “Crazy in love”. She sang a song from her album “Lemonade”, she sang “Déjà vu” along with her husband Jay-Z and her sister Solange came up and performed a sisterly dance with Beyoncé. The audience was enthralled with the performances put up by Beyoncé.

There was also the surprise reunion of the group, Destiny’s child. Kelly Rowland and Michelle Williams came together with Beyoncé to sang themselves into the hearts of the people with the rendition of  their '90s hits "Say My Name," "Soldier" and "Lose My Breath."

Beyoncé was to headline the Coachella music festival last year, however, she could not as she was pregnant with twins. Last June she gave birth to Rumi and Sir Carter. Her fans waited almost a year to see her perform.

The performance put up by Beyoncé was very forceful, meaningful, entertaining and visually grand and majestic, which no other artist can surpass in the coming years. The musical extravaganza the people witnessed will remain with them for a very long time. With this show, Beyoncé has reinforced herself as the Queen of Music.